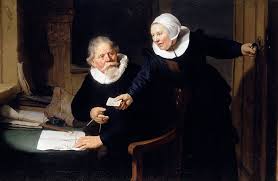 In Hopkinton, MA visiting family on a day with no plans Boston beckoned, specifically, the Museum of Fine Arts and the Isabella Stewart Gardener. Enlivening my drive into Boston, I blew past the city, this year’s first tribute to my non-existent sense of direction. Recovering, I found the MFA with a long line outside, more than bearable on a beautiful, sunny day. The exhibit, Class Distinctions in the Age of Rembrandt and Vermeer, includes many works never before seen in the U.S, some gathered from private collections, some from other museums.
I especially liked the painting of a barber surgeon at work on a client with the tools of his trade scattered about as well as Rembrandt’s The Ship Builder and His Wife which has never before left Windsor Castle. Kudos to curator Ronni Baer for a fabulous job. The entire show is a gem.

Lunch at the museum café was lovely food-wise but the person who installed the chairs around the good-looking bar in the center needs to rethink them–they’re a good three inches too low so eaters sit uncomfortably below their food like a “drink me” scene straight out of Alice. 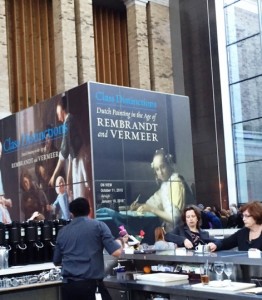 The nearby Gardner has a small show devoted to works by Venetian-born Carlo Crivelli, The often-overlooked Crivelli, who lived from 1430 or 1435 to about 1494, painted religious subjects exclusively; was banished from Venice for committing adultery, and is known for literally gilded the lily, building up surfaces with low relief plaster he then painted and gilded, adding drama to crowns and armor. 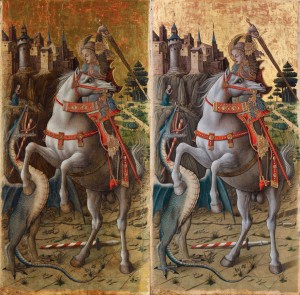 Crivelli was also big on cucumbers which he inevitably included in garlands of fruits and veggies.

For a personal grand finale, I “lost” my car in the MFA parking garage having failed to note the number of the space I was in. Apparently some New Yorkers can’t deal with these new- fangled parking ideas.

In a salute to Crivelli, this is a recipe for Cucumber Sandwiches. I’d serve as an h’ors d’oeuvre with drinks. 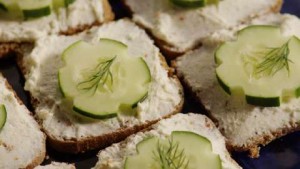 Mix cream cheese, Italian seasoning and sour cream until well-blended. Spread it on the bread slices and top each with a cucumber slice. If you want to go wild, add a sprig of dill. Wilder yet? Also a small dot of pimento. Live it up.

This entry was posted in Uncategorized and tagged Boston, car, cucumber, St. George. Bookmark the permalink.