Joy to the World A and B 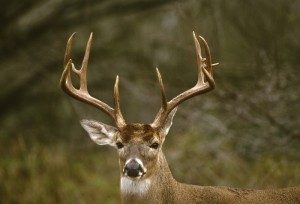 Both “Joys” were concerts, the first an “event” at the Church of the Intercession at the northern end of Manhattan. The program centers around Clement Clark Moore, author of A Visit from St. Nicholas. Last year upon arriving, I was handed a pair of antlers which most of the audience were wearing–of course, I put mine on. This year I brought them and came with a friend who wins the antler fashion award as hers are red and feature flashing lights.

The church, a New York City landmark, began in the hamlet of Carmensville north of Harlem. Later Carmensville became what we know as Hamilton Heights where the first church was wooden. Years later, the church joined forces with Trinity Church as one of its chapels; it’s stone and very handsome with wonderful stained glass windows.

This year’s Moore event began with a brass band, children’s choir and dancers; later the poem was read with all the attendant children encouraged to come sit on the chancery stairs. The reading was very dramatic, accompanied by a bass player; last year’s simpler rendition was more to my taste.
Both participants and audience are multicultural; many carols are sung one verse in English, one in Spanish. After the reading and a procession that included St. Nicholas and

The Rector, Church of the Intercession 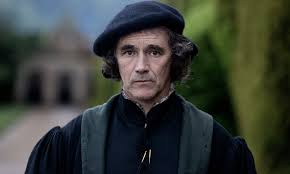 we left the church, glowsticks in hand, and walked down a steep hill to the cemetary where a wreath was laid on Moore’s grave. After came a reception with sandwiches, wine, soft drinks, coffee and cookies.

The second, the Holiday Concert at the Guggenheim Museum, was far chicer and very uptown. Those with First Class (i.e., pricey) tickets sit on chairs level with the musicians where cookies are served. The rest of us stand along the ramp for the whole height of the museum. Music is played by the Vox Vocal Ensemble, conducted by white-tie clad George Steel. There is plenty of brass and percussion (anyone every seen a female percussionist?) The male musicians and singers wore dinner jackets while the ladies mostly opted for long dresses. The eclectic program included a piece composed entirely of clapping; Stravinsky’s Fanfare for a New Theater; Three Kings, a work by conductor Steel (fabulous) and traditional carols, all accompanied by a show of changing lights behind the musicians. Standing at level two of the ramp, Mr. Steel’s comments were impossible to understand but the music was brilliantly performed even though the sound was distorted by the museum space. 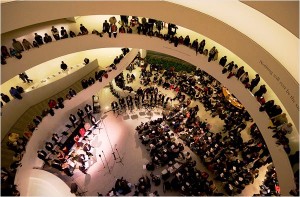 Of the two, I give the Guggenheim points on virtuosity and Intersession points on heart. It’s Christmas so there’s room for both.

In the full-on holiday spirit, here’s a recipe for Yorkshire Pudding. I’m not serving it to my clan who will be (I hope) happy with gravlax, pork loin, mushrooms on toast, haricots vert, bread pudding with whiskey sauce and ice cream and a lot else. The holiday beverage is prosecco. 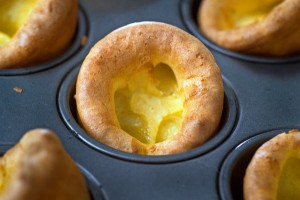 Yorkshire Pudding
3 large eggs
¾ cup whole milk
¾ cup/115 grams all-purpose flour
¾ teaspoon/5 grams kosher salt
About 1/4 cup rendered beef or pork fat, olive oil or melted butter (rendering is sort of a challenge in today’s world. It will yield the most delicious Yorkshire but the other fats will work fine.)
1. Preheat oven to 400 degrees. In a medium bowl, whisk together eggs, milk, flour and salt. Do not overmix. Allow the batter to rest 30 minutes at room temperature.
2. Add a teaspoon of fat to each cup of a 12-cup muffin tin and transfer to the oven to heat, about 5 to 7 minutes. Once hot, divide batter equally to fill the cups about halfway, and return the muffin tin for 10 to 12 minutes, or until the puddings are golden brown and crisp. Serve immediately.
Pass the beverage of your choice and enjoy the holiday. God Bless us every one, as Tiny Tim said

This entry was posted in Uncategorized and tagged antlers, Christmas, church, concert. Bookmark the permalink.

6 Responses to Joy to the World A and B