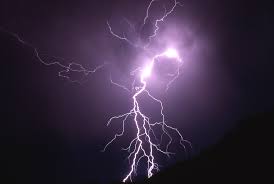 Seized: Inside the Mystery of Epilepsy, an arresting documentary film about the condition, had its genesis via a woman I’ve known since she and my younger daughter were in first grade. The woman, diagnosed as a teen, is now grown with three lovely daughters and a relationship with filmmaker Peter Schnall of Partisan Partners who made the movie together with co-producer Elizabeth Arledge. Seized, screened at the Directors Guide Auditorium on West 57th Street, follows four families, each with a member who has uncontrolled seizures, showing them and their doctors exploring the newest therapies. Some of these help a lot; some a little, some don’t seem to be effective.
All but one of the families was present and participated in the after-film Q–and-A. As many in the room deal with seizure disorders, it wasn’t a huge surprise that someone had an episode; coincidentally, a man seated next to me who was assisted out by Orrin Devinsky, MD, Professor of Neurology, Neurosurgery and Psychiatry Director, NYU Comprehensive Epilepsy Center, and the doctor the woman who inspired the film works with. In the near future, the film will be available on public television (check local listings); copies will be available to present at schools, libraries and other organizations. It’s well worth watching and hopefully will break down some of the stigma associated with the condition.
Cut to a very different group in a different part of town. The setting was the famed Apollo Theater in Harlem. 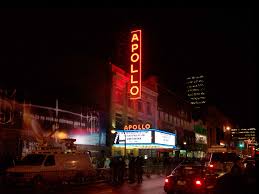 The event, Operation Conversation: Cops & Kids, is a program of the All Stars Project, to help decrease mistrust between relatively rookie police and inner-city youth. A group of kids and cops “enacted” a typical workshop with role playing; afterwards, we were directed to engage the nearest police officer in conversation for fifteen minutes. I especially enjoyed chatting with a very young Chinese officer, a recent graduate of the Police Academy who is assigned to a tough area in the South Bronx. The program is a great effort although as a white woman I certainly can’t

fully understand what it must be like to be challenged by police largely because of the color of my skin.
For the life of me, I couldn’t find a recipe to relate to epilepsy, inner city teens and police so coped out (pun intended) to offer: 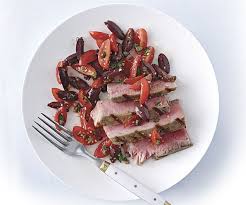 Grilled Tuna Puttanesca
1 cup grape or cherry tomatoes, quartered
1/4 cup pitted Kalamata olives, quartered lengthwise
1-1/2 tsp. rinsed and drained capers
4 tsp. extra-virgin olive oil
1 medium clove garlic, minced
Pinch crushed red pepper flakes
Pinch granulated sugar
1-1/2 Tbs. chopped fresh basil
Kosher salt and freshly ground black pepper
4 5-oz. tuna steaks (preferably about 1 inch thick)
Heat a pan over medium-high heat.
Combine the tomatoes, olives, and capers in a medium bowl. Heat 2 tsp. of the oil in a 10-inch skillet over medium heat. (lot of mediums here, sorry) Add the garlic and cook, stirring occasionally, just until fragrant, about 10 seconds. Add the red pepper flakes and sugar; stir in the tomato mixture and basil. Season to taste with salt and pepper, and take off the heat.
Brush both sides of the tuna with the remaining 2 tsp. oil and season with salt and pepper. Cook until rare to medium rare in the center, 2 to 3 minutes per side. Slice the tuna into thick slices and serve topped with the salsa. (If you feel like going more all out, serve with linguini or other pasta.)

Beer? Wine? Your call but cheers for the patients, doctors, kids and cops.

This entry was posted in Uncategorized and tagged cops, epilepsy, tuna. Bookmark the permalink.