I Love you Trulli 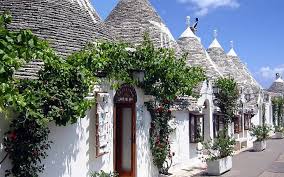 Puglia has lots of small towns, some well-known, others not so much. One day we went to see the famous trulli houses of Alberobello, a UNESCO heritage site. Trulli dwellings are scattered around the nearby area but the greatest concentration is here. The houses, some dating to the 14th century, are made of limestone held together without mortar. Many have designs painted on the roof theoretically to ward off evil; some are still lived in. A woman invited us inside hers making me incredibly glad we weren’t planning to stay overnight as it was, um, compact.

The best reason to visit Grotto de Castellano is to walk through the famous caverns, the largest cave network in Italy stretching roughly three kilometers. Signage about wearing “sturdy shoes” abounds but I wore sandals which worked perfectly well. Our knowledgeable guide also wore a hard hat in a gesture that was pure PR. The entrance cave is open to the sky but thereafter it’s underground although not nearly as cold as had been touted. The Grotto features very impressive stalactites and stalagmites with fanciful names that in some cases call for a vivid imagination.

The path is lit in many areas but not on all the stairs–the tour would never fly in the litigious US. At the end is the White Cave that sparkles with alabaster. After that, a very modern elevator lifts you back up top.

Martina Franca is a must-see with a Centro right out of central casting, full of winding alleys, blindingly white houses and dark red geraniums. Overhead curlicue ironwork balconies almost touch over the narrow streets. When we visited, many shops were closed, “because it’s Monday.” I didn’t figure that out but enjoyed strolling, drinking a cappuccino and the calm of the relatively tourist-free streets. 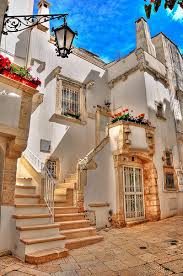 We returned several times to Polignano a Mare that has about 20,000 inhabitants and feels like a small resort town. One night we ate at Osteria dei Mulini (named for the flour mills {mulini}that once stood across the street) where I scarfed down orecchette, the ear-shaped pasta said to have originated in Puglia.

At the restaurant, the orecchette dish was prepared with fabulous fresh tuna but this recipe with broccoli rabe and sausage is also delicious and requires only one pot.

Orecchette with Sausage and Broccoli Rabe
1 cup chicken broth (you could make it but bought is dandy)
1 lb orecchette
1/4 cup olive oil
3 garlic cloves, crushed
1 1/2 lbs broccoli rabe, florets and tender stems only
1/4 teaspoon crushed red pepper flakes
1/4 teaspoon salt
1/2 lb sweet Italian sausage, cooked and crumbled (drain off the fat)
2 teaspoons unsalted butter
1/2 cup Parmigiano cheese, freshly grated (well, of course. I’m waiting for a recipe that calls for “old, nasty Parmigiano)
Bring the chicken stock to a boil.
Cook the orecchiette in a large pot of boiling salted water until al dente; drain well.
Meanwhile, in a large, deep skillet, heat the oil. Add the garlic and cook over moderately high heat until golden. Add the broccoli rabe, crushed red pepper and salt; cover and steam for 5 minutes, stirring occasionally. Stir in the hot chicken stock, sausage and butter and cook over high heat until the sauce reduces slightly, about 3 minutes.
Add the orecchiette to the skillet and toss gently. Sprinkle half the Parmigiano on top and toss again. Serve immediately, sprinkled with the remaining cheese.
Congratulate yourself on getting the meal to the table and raise a glass of one of Puglia’s wines that are now getting well-deserved attention. The dish would also be fine with your house plonk or a glass of water.

This entry was posted in Uncategorized and tagged grotto, Italy, wine. Bookmark the permalink.

2 Responses to I Love you Trulli