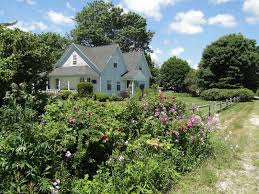 Visiting a good friend on an island in Penobscot Bay that shall go unnamed, we went for lunch to the home of a family member that is the epitome of elegance married with exquisite taste. Even the powder room flowers were magnificent, to say nothing of the outdoor porch or the view across water to other islands. Lunch, served by a charming man who is the general factotum, began with the stupendous soup at the end of this post. The kitchen is manned (well, actually womaned) by a female chef who has been with the house’s owners on and off since 2005.

Getting here from New York was horrific due both to traffic and it being August 1 when a lot of the world heads north. It took three of us driving shifts about ten and a half hours, partly in bumper-to-bumper. We arrived just after a microstorm hit, knocking out power in part of the island so that the folks who had kindly invited us to dinner brought the meal over and cooked it at my hostesses’ house (she has a generator.)

This morning, after admiring the handsome stable next door with two young riders taking a lesson in the outdoor ring, I ambled down to the beach to sit on a log and gaze at sailboats lazing in the water. Other than birds and bees, it was exquisitely quiet, a great contrast to noisy New York. Flowers were blooming, apple trees bearing fruit, lettuces, squash, cucumbers and herbs galore are growing and the whole is pretty idyllic –especially after you’re out of the car.

Later, we went to hear Charles F. Gauvin, Executive Director, Maine Audubon, talk about Maine’s Iconic Wildlife as it is affected by climate change. Mr. Gauvin spoke eloquently about endangered fauna of the area including the brook trout, 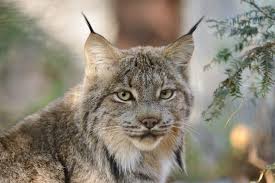 Canada lynx and blackpoll warbler and set out goals for us who want to be sure there are sufficient “critters” around who can adapt to rising temperatures. Here’s a link to Maine Audubon: www.maineaudubon.org (most Audubon’s are separate organizations– here’s how to find one near you : www.audubon.org/audubon-near-you).
Then home to a delicious dinner, in part, a salad picked from the bumper crop of lettuces and arugula in the kitchen garden. 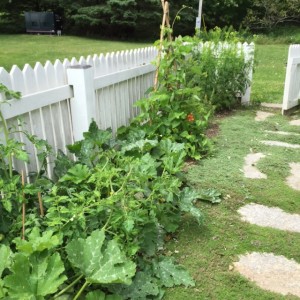 Shuck the corn and cut kernels off the cob, then halve them (or roughly chop)
In a good sized stock pot, scald the milk. When it rises in the pot, throw in half the corn. Turn off heat, put the lid on the pot and steep for at least 20 minutes.

When you’re ready to heat, do it slowly so you don’t scorch the bottom of the pot. Taste and add salt, pepper and Tabasco seasonings before serving.

If you’re into beer and want to keep the Maine theme going, you might down a Frye’s Leap IPA, described by brewers as one of the first examples of an American-style India Pale Ale brewed in Maine. 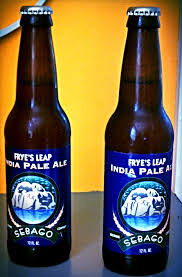 This entry was posted in Uncategorized and tagged arugula, corn, Maine, sailboat. Bookmark the permalink.