‘Twas the Afternoon Before… 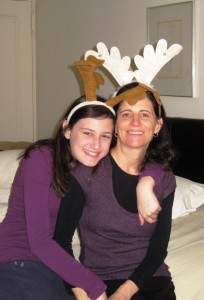 As we have done for the last three years on Christmas Eve afternoon, some members of my family and I went to see the gingerbread creations at NYCs Parker Meriden hotel. My older daughter and her daughter wore their reindeer antlers the entire time including on the bus downtown and back on the “everybody here is from out of town and who cares anyway? theory.  They got a lot of smiles and approving nods.

At the hotel, only six creations were on display, most terrific. My personal fave was the Sphinx with crumbling nose (as in the real one) 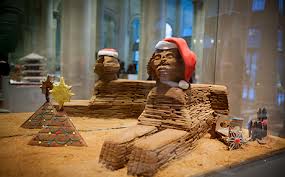 with a chariot lying in the sand nearby, a little baker’s creative license.  Mexico’s Chichen  Itzh, one of the “new” seven wonders of the world,  was also brilliantly conceived although it didn’t make the climb up to the top even remotely as terrifying as my recollection of doing it years ago.The Lincoln Memorial, in white fondant with blue earmuffs and mittens, was fabulous. 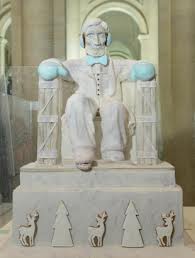 The windows at Bergdorf Goodman were fun but not to be compared with those of 2011 in which each featured a different material like paper or stone– far more creative than this year’s tribute to the Jazz Age.

Before our outing we had a wonderful lunch of Chinese Frittata, recipe below. Lasagna and salad dealt with Christmas Eve; Christmas Day was filled with family consuming  oceans of Prosecco, gravlax and sauce with black bread, goat cheese, flatbread, edamame, sliced flank steak marinated in teriyaki, babaganosh, pita chips and pizza squares followed by bread pudding with whiskey sauce and ice cream for the younger set (the ice cream, not the whiskey sauce.)

Last week also marked the memorial for Isiah Sheffer, founder of Symphony Space and creator of many programs including Selected Shorts. 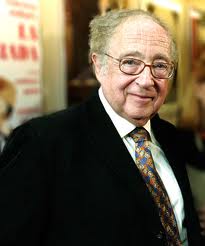 The event, by ticket only, was terrific and very in keeping with Isaiah’s personality—funny and erudite.  There were clips of Isaiah singing a song about arugula and another about his dislike of  NY Times writer Paul Krugman, talks by his wife, daughter and numerous friends/business compatriots and colleagues. After two hours at seven PM, I tore myself away as the end was not in sight and I wanted to get home.

Now comes the doldrums period between Christmas and New Year’s. I feel a bit cooked out but will undoubtedly find that feeling has passed before long and embark on a new cycle.

Leftover Chinese food –don’t be fussy, just use anything you have be it vegetable or animal, the more the better, including rice.  Cut meat and veggies into thin strips.

Beat eggs with milk. Add salt and pepper unless your leftovers have a lot of soy in them making the end result sufficiently salty.

Use a large pan that can go into your oven. Heat oven to 350 and put the pan into  the oven with the butter in it. Pay attention—you want the butter to melt but not brown. When melted, pour in half the egg mixture and return to oven. After about eight minutes, add the Chinese leftovers and Parmesan. A minute later, pour the remaining egg mixture over the top. Bake another ten minutes or so.

To serve, cut into wedges. Serve with a hearty green salad and bread if you wish.  Bundle up and enjoy a pre-Christmas walk.  Happy 2013 to all!

2 Responses to ‘Twas the Afternoon Before…