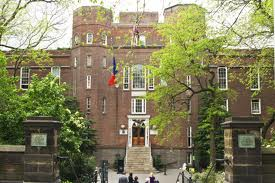 Central Park Arsenal (right at the entrance to the Zoo)

I have lived in New York my entire life and only recently found out about the Arsenal Gallery.  It’s in the old, brick building in front as you enter the Central Park Zoo, now devoid of large animals but still home to the seals, penguins and some other holdouts. The building itself, built between 1847 and 1851, predates the park and began life as a munitions storehouse. The “atrium” lobby has 1930s WPA murals of historic scenes of the 19th century including what look like Civil War soldiers in formation. Each holiday season the gallery mounts a wreath exhibit (that could use better publicity.)  This year’s show had forty-one entries, many made of unusual materials ranging from old bicycle tires to Chinese food containers. 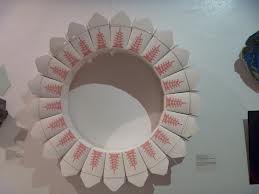 Wreath made of Chinese food containers

One is made of whole almond shells collected from a family farm in Greece. Another is the work of a native American, judging by his name, that includes wind charms, feathers and shells described as “wampum.” 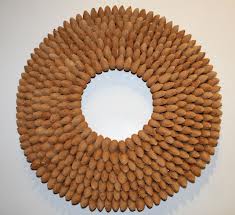 Walking back uptown through Central Park, most people weren’t speaking English.  We New Yorkers should be very glad tourists visit, stay in our hotels, go to our theaters and museums, eat in our restaurants and do their bit for the city’s economy.

The American Museum of Natural History currently has a show called Our Global Kitchen: Food, Nature, Culture, that’s interesting but could be more so. Obviously works of art need dim lighting to preserve them but why does a display of modern artifacts or reproductions need to be so dark and why have display notes in white print against a dark ground making them hard to read? The items to smell in the test kitchen are in bins that require Paul Bunyan to open. (Cranky visitor here, sorry.)

The part of the exhibit I most enjoyed were vignettes showcasing food from the eras of famous people. Jane Austin presence is recalled via ice cream, served in a fancy mold to the gentry she wrote about. 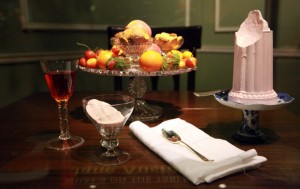 An ancient Roman’s “h’ors doeuvres” are on view.  Elsewhere, there are (replicated) square watermelons as grown in Japan inside special glass containers that set their shape. A recreated Aztec marketplace is full of model foods including crickets for nibbling but, having been to real markets in modern Peru, it’s hard to equate shiny, clean-appearing foodstuffs to the real thing that is far more chaotic and a lot dirtier. I did learn that potatoes were poisonous until peoples in the Andes transformed them into edible crops some 7,000 to 10,000 years ago. 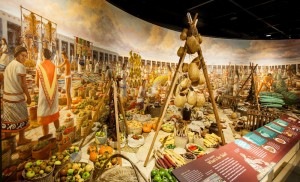 I adore potatoes so in this spirit, here is a recipe for a potato side dish that’s delicious and a cinch to make.

4 russet (baking) potatoes, peeled and sliced diagonally 1/8 inch thick (technically, use a mandolin to slice. You can also do the job with a sharp knife.)

Pat the potatoes dry between paper towels and arrange them in one layer in 2 buttered cookie sheets; if you have a non-stick cooking spray, this works fine for greasing the pans. Brush the potatoes with the butter, bake them in a preheated 500°F oven for 15 to 20 minutes, or until the edges are golden brown. Sprinkle them with the salt.

P.S.  NYC Foodie alert: if you like tapas as in the real deal, take yourself to Txilkito (“chekeeto”) in Chelsea at 240 Ninth Avenue. They take reservations for parties of three or more and the food is fabulous.  We had something resembling a Basque “cookie” with a slightly spicy mushroom filling inside two pieces of grilled bread (four in a serving); ultra thin-sliced pork plated with a puree of fava beans and a hot dish of white beans with mussels. And more. All divine.

This entry was posted in Uncategorized and tagged Aztec, Chinese, mushroom, tapas, wreath. Bookmark the permalink.