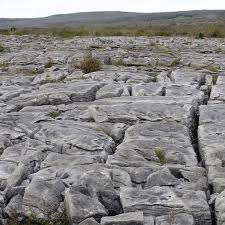 When visitors back from Ireland say “it’s so incredibly green,” they are not factoring in the Burren, a large area in northwest County Claire. The Burren is dark and brownish, resembling a lunar landscape because it’s mostly limestone with isolated rocks called clints, criss-crossed by cracks or ‘glints.’ There is some green as numerous Arctic, Mediterranean and alpine plants grow, often next to one another.  An esker, (long ridge of stratified sand and gravel), snakes through the Burren and the whole area has a weird, unworldly quality. 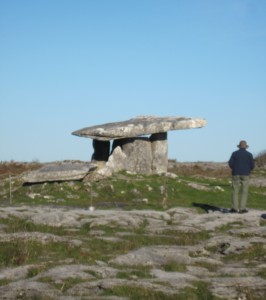 Poulnabrone Dolmen is technically a portal tomb although the folk story as told by Dave, our Wolfhound leader,  depicting it as the “bed” of mythological King Dermott and his lady love, Grania, is a more charming way to think about it. As a bed, it’s not quite a Tempurpedic but the Irish are nothing if not fanciful.

En route to the Burren, we passed a sign for Lisdoonvarna, a town famous for its annual matchmaking festival in September (and the title of a Christy Moore song). Apparently many of what are referred to as “bachelor farmers,” i.e., not to be confused with gorgeous Irish men of the Colin Farrell  and Gabriel Byrne variety, attend this event during which the town goes into singles-fueled madness.

The Cliffs of Moher are one of the top tourist attractions in Ireland and, as such, typically mobbed. Because we arrived there late on a chilly day, while not alone, we didn’t have throngs of people to contend with. The cliffs, seven hundred feet high in some spots, are all about the view that stretches way into the horizon with the ocean churning below. 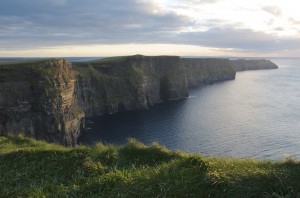 Although a fierce wind whipped about and it was pretty cold, the truly spectacular view was mesmerizing (as was the thought of a pub visit later on.) 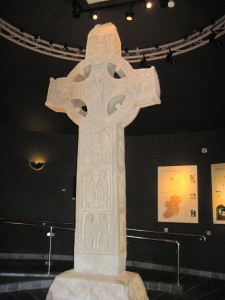 Our last major stop before returning to Dublin was at the monastery of Clonmacnoise on the River Shannon where several ancient High Celtic crosses are on display, many moved indoors to shield them from further erosion by the wind and rain.

No recounting of the Irish countryside would be complete with reference to sheep, grazing on every hillside, in pastures next to ancient stone structures and, inevitably in the road. Waiting for sheep to get out of the way is a commonplace  event. The sheep seem very good-natured and no one rushes them. 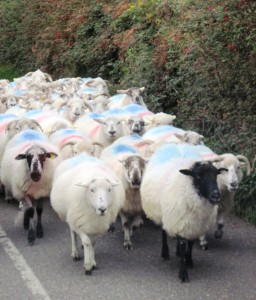 In honor of the sheep, this is my go-to recipe for lamb stew.

Feeds 4 depending on how hearty the appetites are.

3 pounds lamb for stew (meaning it has bones in it)

6 carrots, cleaned and cut into pieces roughly the size of the potatoes

3-4 turnips, peeled and cut into pieces about the same size as potato pieces

2 cups frozen string beans.  (Note: if you prefer to use fresh, fine.  Just allow a little longer to cook them into the stew.)

Brown the meat in the oil. Add the broth and scrape up any brown bits in pot. Add tomato paste.  Put lid on pot and cook at low simmer for about one hour.  Add potatoes, carrots, turnips, parsnips, onions. Cook 1 hour more or until veggies are tender.  Skim any fat off top  Add the peas and beans (no need to defrost) stir in and simmer until they are tender.

This entry was posted in Uncategorized and tagged cross, green, Ireland, sheep. Bookmark the permalink.

One Response to Emerald Green–Mostly