Of Trotters, Snugs and Hurling

Continuing the Irish saga, we made a stop at Cork’s English Market, put on the ‘must see’ list when Queen Elizabeth  visited last year. 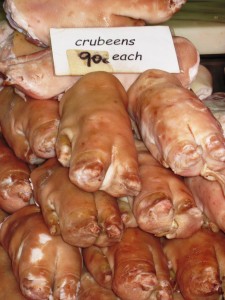 Although I loved these pigs’ trotters I won’t be providing a recipe for them (and hear those sighs of relief!) Later, a group of us slogged uphill through six muddy miles along The Windy Gap in the National Park of Killarney, admiring the very old oak trees and stone walls entirely covered with moss.

Horseback riding on Derrynane Strand was one the highlights of the Ring of Kerry—the beach is magnificent and when we visited, totally empty. 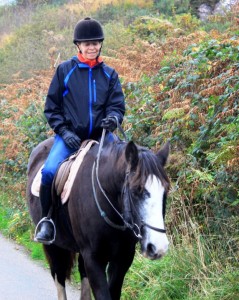 From Jessie’ back (my horse) there was a first class view of the former home of Daniel O’Connell, elected the first Catholic Mayor of Dublin in 1841. This very “flash” property, as the Irish would call it, is now a museum.

We spent a couple of nights in Portmagee, a picturesque fishing village that is the jumping off place for visiting  Skellig Michael, an ancient monastery literally hewn out of the rock by monks and occupied until the 12th or 13thcentury. Reaching the top involves an hour-long boat ride and then climbing 600+ slippery stairs—since I was a tad beat after the previous day’s hike and horseback adventures, I declined and opted for a tamer outing at an exhibit about Skellig Michael and visit to an old slate mine followed by a long bike ride, carefully staying on the left on narrow, twisting roads with the Atlantic on my right and palm trees dotting the road thanks to the temperate climate. 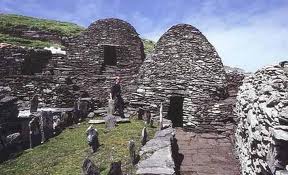 On another beach, we played (well, attempted) two Irish national games, hurling and Gaelic football. My talent for both is non-existent but loved my stint as goal tender with the assistance of a very enthusiastic Jack Russell Terrier. (She insisted on chewing the ball, not in accordance with the rules. The Irish take their sport seriously.) 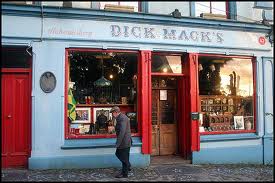 The sidewalk in front of Dick Mack’s pub in Dingle is marked with stars from celebrities who have visited, sort of the Dingle answer to the Hollywood Walk of Fame. The pub is quintessentially Irish, perfumed by beer and boasting two snugs, little “rooms” formerly reserved for women with separate openings both to the bar and the front door so that ladies wouldn’t have to mingle with men, a relic of bygone times. We met several quintessentially Irish bar flies–older men minus most of their teeth who spend their days at the bar but still have a certain charm and love to talk.  After Dick Mack’s we moved to Foxy John’s, a pub that is also a hardware store, and then to yet another pub for some  (spontaneous) Irish music.

As many of you are likely dealing with leftover turkey, this recipe for colcannon would make a great accompaniment. It’s not exactly a Weight Watchers recipe but a nice after dinner hike would help dispel the calories. And, you can always tell yourself the greens are healthy. 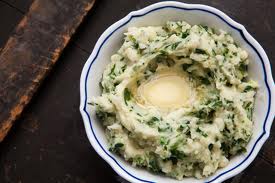 3 green onions (including the green onion greens), minced (about 1/2 cup)

Put potatoes in a medium pot and cover with cold water by at least an inch. Add 2 tablespoons of salt, and bring to a boil. Boil until potatoes are fork tender, 15 to 20 minutes and drain.

Return the pot over medium-high heat. Melt butter in pot and add greens. Cook greens 3-4 minutes, or until they are wilted and have given off some of their liquid. Add the green onions and cook 1 minute more.

Pour in milk or cream, mix well, and add potatoes. Reduce the heat to medium. Use a fork or potato masher and mash the potatoes, mixing them up with the greens. Add salt to taste and serve hot, with a knob of butter in the center.

This entry was posted in Uncategorized and tagged Irish, pub, Ring of Kerry. Bookmark the permalink.

One Response to Of Trotters, Snugs and Hurling