A Short Way to Tipperary 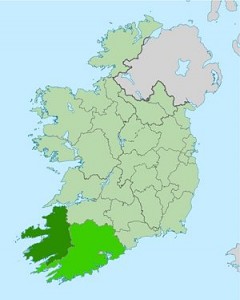 Because we didn’t want to drive on the left and thought a guide would help us make the most of our time in southwest Ireland, we joined Wolfhound Adventure Tours. Turns out that even for us, who always go it alone, this was a brilliant move, or, as the Irish would say, full of craic (pronounced “crack), meaning fun. The other ten Wolfhounders were great and Dave O’Connor, the man who runs the organization, is funny, incredibly smart, good at adapting to weather (although ours was terrific), spotting wildlife, discussing Irish history and myth, o playing exactly the right music at every turn, adjusting bikes and generally insuring that everyone with him has a wonderful time. Dave and the overall Wolfhound experience get an A+. 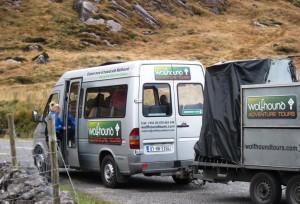 In the Wolfmobile, a Mercedes van with an attached trailer for bikes, we first stopped at the Rock of Dunamase, the ruins of a grand (how Irish!) castle dating to medieval times. From there we moved onto the Rock of Cashel in Tipperary (cue song), 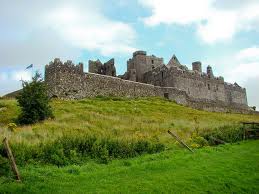 supposedly the site of the conversion of King Munster in the 5th century.  We next drove to Hore Abbey that dates from 1266 and is overlooked by the Rock of Cashel.  At each spot we had plenty of time to wander over and around the rocks ruins and admire the scenery.

Ultimately, we found ourselves at Cahir Castle, a castle like those in fairy tales and once the stronghold of the Butler family, source of a great factoid:  the right of butleredge. This honor meant being the one who poured the first glass of wine for a newly crowned king.  Being the king’s butler translated into rolling in money. Next time you meet a Butler, see where he or she stands in the 1%. The Cahir portcullis still works so the noise has been incorporated in many films.

Another nifty Cahir feature: the machicolation, an opening above an entrance way, useful for dropping hot oil, sand or other nasty substances onto the enemy. The word derives from the Old French machecol, that comes indirectly from the Old French macher ‘crush’ and col ‘neck.’ I’m sure you’ll find many ways to incorporate this into your daily conversation.

Early in the trip we had our first taste of Guinness. 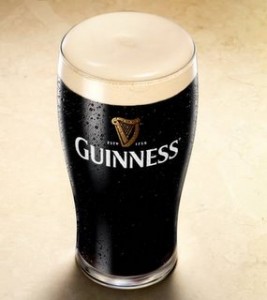 At home I never drink beer but, citing Dave, the “tall and creamy pint “does indeed go down smoothly. Many more pints followed.  At one overnight our breakfast was spelt pancakes but more often we were offered (and gobbled down) what is known as ‘full Irish’ which includes most or all of the following: bacon,  sausage; black and white pudding—both other kinds of sausage;  eggs; baked beans and grilled tomato, the whole usually served with various breads including Irish soda bread. Fortunately, Wolfhound Adventures includes plenty of hiking, biking and other outdoor activities or the carb factor would be a killer. 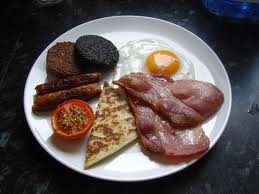 This recipe is for an Irish stew with Guinness. During the trip, we ate a lot of stew and enjoyed every bite.

Sprig of fresh thyme (or use about ¼  tsp dried)

Cut beef 2-inch cubes and toss with 1 tablespoon of the oil. In a small bowl, season the flour with salt, pepper and cayenne. Toss meat with seasoned flour. Heat remaining 2 tablespoons oil in a large skillet over high heat.

Brown the meat on all sides. Reduce the heat, add the onions, garlic and tomato puree mix, cover and cook over low heat for 5 minutes.

Transfer the contents of the skillet to a casseroleand pour half of the Guinness into the skillet. Bring Guinness to a boil and stir to dissolve the caramelized meat juices on the pan. Pour over the meat, along with the remaining Guinness. Add the carrots and thyme. Stir and adjust seasonings. Cover the casserole and  simmer over low heat or in a 300 degree oven (my preferred method) until the meat is tender, 2 to 3 hours.

Check again for seasoning. Garnish with chopped parsley and serve. I’d drink a good red wine with this although the Irish would stick to beer.