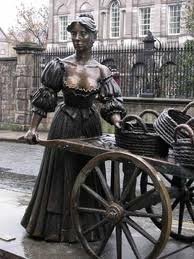 Mythical Molly Malone, referred to as “The Trollop with a Scallop” and “The Tart with a Cart

A lot of the people you meet aren’t Irish.  Many tourists and a lot of the staff at the very nice Brooks Hotel come from elsewhere, in fact, a bartender told me that the second largest concentration of Polish people after Poland is Ireland—post-Celtic Tiger.

The Book of Kells resides at the Library of Trinity College.  I bought the small MP3  wanna-be accoustaguide that is a bit of a challenge and consistently had me standing in the wrong place. 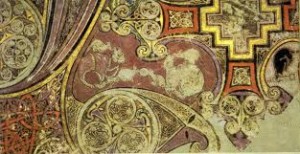 The Book itself is written on vellum (calfskin), bound in four volumes and the pages on display are changed regularly. I saw one decorated page and two of script and enjoyed the exhibit that explains  how the Book was created, monks’ marginal comments like “It’s cold in here”, how the pigments were obtained and so forth. Then came the real treat: the Long Room of the Old Library that stores 200,000 of the University’s oldest books. The vaulted ceiling replaced the original, flat one in the 1850s when the University had to make more space to house volumes. 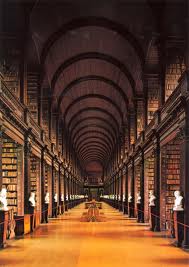 Around the perimeter of the room are  busts of men (but of course) including greats like Shakespeare and Jonathan Swift as well as many I’d never heard of.  A case holds what is said to be the oldest Irish harp in existence, dating from the 15th century.

At the Abbey Theater we saw a contemporary take on Wilde’s The Picture of Dorian Gray that had received raves although the man playing Gray left both of us cold. Fabulous costumes though and wonderful photos of Abbey greats on the walls to be observed at “the interval” when people race for drinks and coffee as if their lives depended on it. 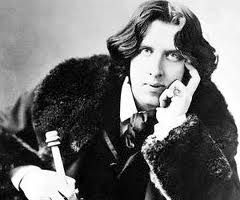 One of our most memorable dinners was at The Winding Stair above a bookshop of the same name. The stair does indeed wind and the food is fabulous as is the view of the River Liffy right below. My appetizer was breast of wood pigeon served with beet cubes, hazelnuts and peas shoots drizzled with an Irish balsamic reduction. The sea bream that followed included roasted celeriac –celery root on our side of the pond. The waiters wear jeans, ties and aprons with red, green or blue stripes and are very professional. The chef knows his stuff.

It appears that roasting celeriac is just like roasting other veggies, per my fave Mark Bittman. He calls it “Baked” but that’s just another way of saying “roast.” All you need (besides love) is:

Celeriac –ask at a good veg market. See how big it is and figure number of servings from there. You may need four or five depending on how many you’re feeding. 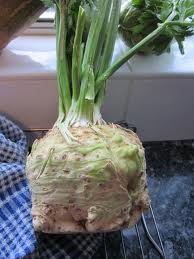 A raw celeriac all lumpy-bumpy

Thoroughly wash whole celeriac and pat dry; brush the outside with olive oil, sprinkle liberally with coarse salt and bake for 1 to 2 hours (longer is usually better) until the outside is roasted and evenly crisp and the inside is tender.   (Personally I’d peel it to get the uneven spots off)

Remove from the oven, cut up if you like (you can also sprinkle with more oil and salt) and serve. ( If you didn’t peel you can eat the skin.) 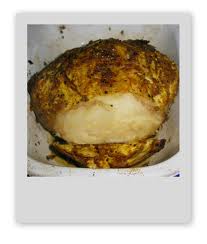 I’d serve this with lamb to stay in the Irish mode but it would also be terrific with a Thanksgiving turkey assuming you make enough.

Sláinte!    (this is Gaelic for “cheers” or “health” and pronounced slahn-CHA—after 11 days I still had trouble getting it right.)

This entry was posted in Uncategorized and tagged Book of Kells, Dublin, lamb, Oscar Wilde, theater. Bookmark the permalink.

6 Responses to In Dublin’s Fair City…