In the 1920s,  New York City housewives bought nuts from peanut vendors,  chopped them into a rough form of peanut butter and rendered the stuff spreadable with condensed milk or chili sauce. (My mother, nobody’s fool but someone whose idea of fixing dinner was “making” chicken salad by tossing pre-cut chicken with mayonnaise,) used to combine peanut butter with chili sauce and pile the result on a Ritz cracker for a quick hors d’oeuvre. Not sure if this makes her ahead of or behind her time.)

There is a lot to chew on at Lunch Hour NYC, the fun and very enlightening exhibition that chronicles 150 years of lunch history in the Big Apple, on view at the main branch of the New York Public Library until mid-February. The exhibit deals with many aspects of lunch including lunch at home, the power lunch, charitable lunch, quick lunch and the ethnic contributions to what, today, can be considered lunch.  Among the factoids: 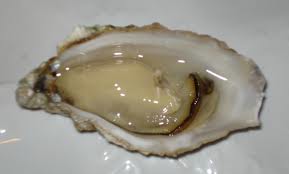 Currently hovering in the $2.00 and up range 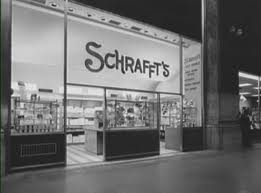 On a more exalted outing, I went to The Forum of the Twelve Caesars, one of Joe Baum’s extravaganza restaurants. The exhibit has a Caesar’s menu from 1975 and menus from other bygone watering holes as well as a hot dog wagon, a display and explanation on the start of the school lunch program, cartoons from Sardi’s, (largely of people I never heard of),  a pretzel wagon, (note: pretzels were considered disreputable because of their association with saloons),  and a lot more. By all means go to the exhibit but skip lunch time because it will likely be crowded then and there’s a lot to, um, digest.

This recipe for Asian Chicken Salad includes a  two- way nod, one to Mark Bittman, my personal hero for his wonderful, never-fail recipes and easy-going attitude, and one to my mother, a non-cook who served great food. 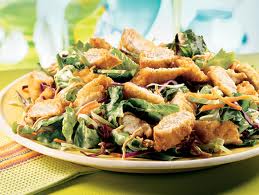 1 clove garlic, peeled (I omit this)

1 tablespoon rice or other vinegar

The actual recipe starts by having you cook the chicken. I’m assuming you either roasted a chicken earlier in the week or bought a rotisserie bird.

In a blender, combine the remaining soy sauce with the peanut butter, sesame oil, garlic, hot sauce, salt, pepper, sugar and vinegar. Turn the blender on, and add hot water, a teaspoon at a time, until the mixture is smooth and creamy. (You will not need more than 3 teaspoons of water.)

Peel the cucumber (if it is waxed), slice it in half the long way, and scoop out the seeds with a spoon. Cut it into 1/2-inch dice, and combine in a bowl with the sauce. Toss chicken with the sauce and cucumber. Taste, and adjust seasoning if necessary; then, serve hot or cold. Mr. B suggests garnishing with cilantro—I’d go with scallions.

Sit down to a lovely lunch. Toast the Public Library. If you’re feeling benevolent, donate to the library.

5 Responses to Let’s Do Lunch