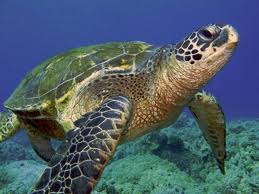 When a sea turtle in southern Florida is reported sick, the call usually goes to the Turtle Hospital in Marathon Key. Some ailing turtles are so enormous that the turtle ambulance is summoned along with hospital staff to hoist and transport the critter. The Marathon hospital, officially, the Hidden Harbor Maritime Environmental Project, Inc., is staffed largely by volunteers with pro-bono help from veterinarians.  Most of the turtles cared for here for are loggerheads or green sea turtles with an occasional Kemp’s or Olive Ridley checking in. 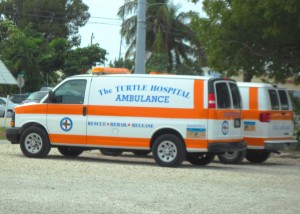 The ninety-minute tour includes a walk through the very impressive hospital that includes an operating room complete with a system to anesthetize turtles, IV lines (put into the neck) and “recovery rooms” i.e., small, water-filled pens for post-op turtles. 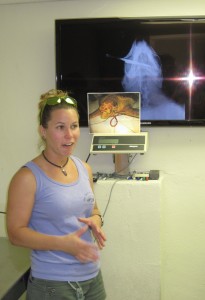 Sea turtles suffer serious shell damage from boats as well as intestinal impactions caused by ingesting plastic bags, balloons, fishing lines and hooks. Some turtles need flipper amputations because they became entangled on a rope or line and many undergo surgery to remove viral tumors that affect more than half of all sea turtles.Turtle meds are carefully stored. (Fridge picture below.) 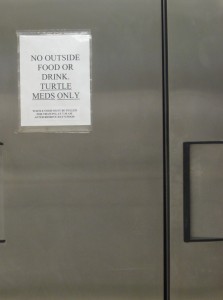 Fully recovered turtles are released back into the wild amid much cheering, tagged with a microchip and metal tag for further study. Those who will never be well enough to  make it on their own stay permanently, swimming in the pool of the motel adjacent to and now part of the hospital (when we visited, there were thirteen permanent residents.)  Each turtle tank has a card with the occupant’s name, date of admission, medical problem, diet and other notations. According to our guide,  there are usually  twenty to forty turtles in some stage of rehab as well as a hatching or two that ‘works’ by visiting schools and participating in educational  outreach. The tour includes a look at a glass case of items confiscated by U.S. Customs of items made of tortoiseshell (now illegal as these turtles are a protected species), and cans of turtle meat (also illegal.)

No turtles for breakfast but a great local restaurant, Harriet’s, that’s deservedly been in business for thirty-five years. Harriette’s biscuits are as big as a large man’s hand–incredibly fluffy and addictive. 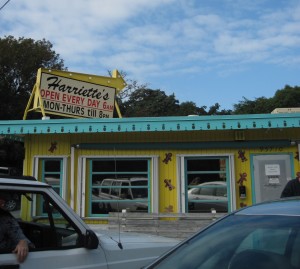 Instead of a biscuit recipe (or one for mock-turtle soup),  here’s one for grilled shrimp that can be eaten as is or served over pasta like linguine. 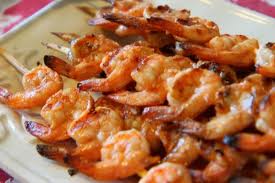 skewers (Note: you can easily use metal skewers and do this in the broiler–result will be very similar.)

Preheat grill for medium-low heat. Thread shrimp onto skewers, piercing once near the tail and once near the head. Discard marinade.

Lightly oil grill grate. Cook shrimp for 5 minutes per side, or until opaque, basting frequently with reserved marinade.

This entry was posted in Uncategorized and tagged biscuit, Florida, hospital, shrimp, turtle. Bookmark the permalink.