Ernest Hemingway in the 30s, pre-beard

In 1931, Ernest Hemingway and wife #2, Pauline Pfeiffer, bought a large house in then- out- of- the way Key West and lived there for about ten years. During this period, Hemingway wrote many of his most famous works including. A Farewell to Arms, The Snows of Kilimanjaroand others. According to the possibly apocryphal story, Pfeiffer and Hemingway’s two sons were given a six-toed cat by a ship’s captain—a photo in the house shows the boys with Snowball, the cat. As cats will, the original had kittens, many displaying the dominant polydactyl gene. Today, there are roughly forty-four cats roaming the house and grounds, sleeping on the master bed, lounging on tables, sofas and in houses set about the grounds. In each litter, some kitties have six toes per foot and others don’t. Not a single cat is shy although visitors are asked not to pick them up (patting is OK.) 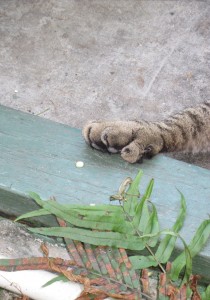 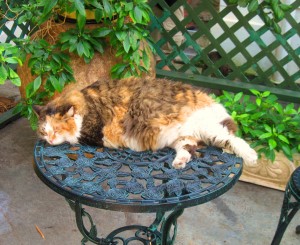 A large calico but can't see the toes

The cats are terrific but so is the house that has very high ceilings, framed letters and pictures and some of the original furniture. We were told that Pauline thought the existing ceiling fans tacky and had them removed and replaced by glass chandeliers made in Murano, Italy. (I thought some of the chandeliers beyond tacky.) The large bathroom adjoining the master bedroom is said to have been the first second-floor bath in Key West with running water, obtained from a large roof-top cistern. Hemingway’s writing studio is adjacent to the house, originally accessed by “bridge” although now it’s entered via a flight of stairs. Through a metal grill, you can see the great man’s typewriter, some stuffed animal heads, books and his desk. Outside is a pool, very large for the nineteen thirties, with a penny embedded in cement next to it. Hemingway is said to have given Pauline the penny, remarking that the pool had cost him his last cent. Well, maybe not. 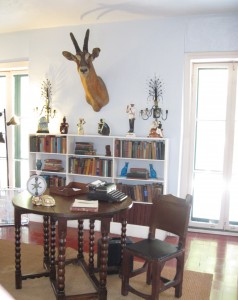 There is also a cat drinking fountain, originally a urinal at Sloppy Joe’s, a local bar Hemingway frequented. The  based is  covered in Italian tiles and topped by an old olive oil jar thanks to Pauline’s taste or sensibilities—your pick. 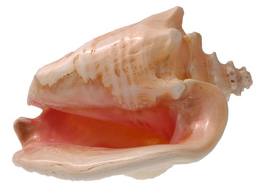 There are a lot of restaurants in Key West, several that just miss getting a 10. Flaming Buoys is sleek and produced a fabulous tuna and grapefruit cerviche, 905 serves an appetizer ‘tuna dome’ that surmounts a lot of very fresh crabmeat and a whole Thai yellowtail that was wonderful;  Latitudes (read Attitudes), reached by a private ferry, is stylish with fine food, marred by less than good service.

The people of Key West refers to themselves as “Conch’s” (‘konk’, not consh) because the original settlers practically lived on conch meat, now illegal to harvest and brought in from the Caribbean. To make this recipe, substitute clams for the conch:

In a large pot or stock pot, cook bacon over medium heat until browned, approximately 5 minutes.

Wrap allspice, bay leaves, and thyme in small piece of cheesecloth (a bouquet garni) and tie cheesecloth closed with string.

Add hot pepper and garlic and cook for about a minute.

Add clam juice, water, potatoes and bring to a boil.

Add the cheesecloth with spices. Reduce the heat, and simmer, stirring occasionally, for 25 to 30 minutes.

Add the conch/clams and cook until the meat is tender (conch is very tough- clams should be done in under fifteen minutes.)  Remove pot from the heat and discard the cheesecloth with spices.

Add the lime juice and parsley, stir to combine, and adjust the seasoning to taste. and serve hot.  While you’re at it, give your cat a cat treat.

7 Responses to Papa and the Polydacts