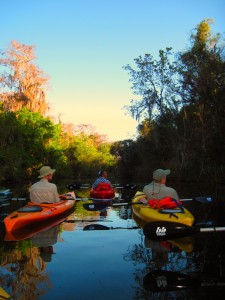 Kayaking in the Florida Everglades taught me two interesting lessons: 1. I would not win a kayaking competition and 2. There are a lot of alligators around these parts.

Staying in Everglades City, I joined a group of nine others who assembled at 7:30 AM under the leadership of our guide/naturalist John, a very patient guy. We got into John’s  van, our kayaks already loaded on racks, and drove about fifteen minutes to a launching spot on the Turner River in Big Cypress Park. Two couples were in tandem kayaks; the rest of us paddled solo. 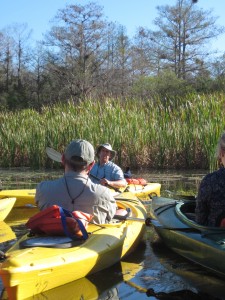 Paddling isn’t hard once you realize that a gentle stroke is better than a hard pull but later, when we ventured into a twisty passage among mangroves growing right down into the water, it was a lot more challenging. I got hung up in the roots a number of times—not hard to get out but a little embarrassing.  During the three hour paddle, (taken at a very leisurely pace), we stopped often so that John could point out birds or tell us about the foliage. We passed at least seven alligators including one known as “Mrs. Smith,” because she just sits there watching the world go by (not that we tried to get in her face) and another mama ‘gator with a baby on her head, one on her back and another two close by. John told us that as long as we didn’t approach the critters head on, they would leave us entirely alone –we didn’t and they did. 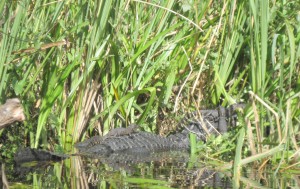 During the trip, we saw egrets, Bald Eagles, moor hens, a limpkin (great name!), a Great Blue Heron, ospreys and two anhingas (another great name) and there were probably lots of other birds. One woman in our group is a serious birder, able to spot birds far away while many of us (me among them) often needed them pointed out. The anhinga, sometimes called the ‘water turkey’ has a big wingspan and, when wet, has to hold its wings outstretched to dry them before it can fly again. 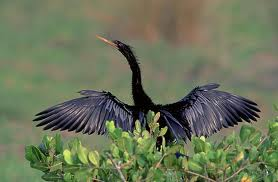 Once through the mangrove swamp slalom, we stopped in a pool at the other end for a snack of cookies and then retraced our way through the mangroves. I did a worse job going back but my fellow paddlers were very tolerant and some of them got hung up now and then as well. 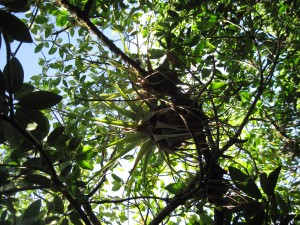 Looking up at the mangrove thicket from my kayak

We did not camp out but ate at a very decent, very campy restaurant that night enjoying Margaritas and incredibly fresh fish. However, should you be actually camping, it couldn’t get simpler than this:

1 fork
Step 1: Cut the orange in half and eat it with a spoon.
Step 2: Pull out all the membranes to form a perfect orange-rind coddling cup.
Step 3: Crack the egg into the orange peel cup.
Step 4: Use sticks to place the cup into the fire and cook for about 5 minutes.
Step 5: Eat the egg right from the cup.

Try to keep the cup balanced while cooking. Mixing oranges, eggs and coals won’t taste good. The bonus is almost no clean-up.

This entry was posted in Uncategorized and tagged alligator, camping, Everglades, kayak, Margarita. Bookmark the permalink.