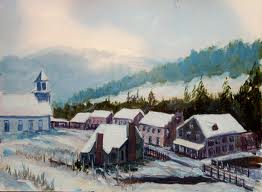 In the course of gathering material for a magazine article, I drove around Vermont’s Northshire, talking to owners and managers of art galleries about their summer plans.  Meeting the gallery representatives who are as different as can be was fascinating —some were very welcoming and understand the value of publicity while others almost had to have details pried out of them. Looking at the works currently on exhibit with almost no one else in the gallery (not enough snow to entice many visitors), was a treat as each gallery has its own particular look and feel.

Work by Frederick Faviano at The Gander Gallery, Manchester, VT 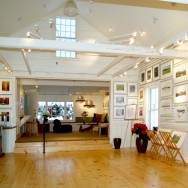 Inside The welcoming space of the Village Green Gallery, Weston, VT

The last time I “studied” art and artists was at college where a redoubtable professor gave a course based on slide lectures in a darkened auditorium each week. No one nodded off as the professor was a bit of a tiger (and we were nineteen.) Does anyone remember Miss Barbor? 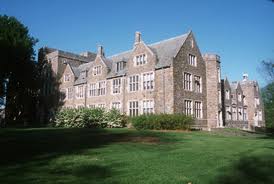 Blodgett Hall at Vassar where (I think) Art 105 took place

For many years, my husband owned a gallery devoted to Asian art. 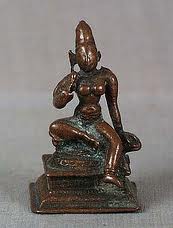 Part of the job involved coping when business was slow and customers or even browsers, few and far between. (As a classic Type A, I knew this work was not for me!) Some of the gallery people I talked with confessed that off times can be dull but others are either artists themselves with works in process or have interesting ways of using spare time to deal with paper work or re-hanging displays.

Does one go into the gallery business because he or she loves art but either can’t or doesn’t want to make it? The owner of Gander Gallery in Manchester began because her father is an artist and she grew up in a world of painters and sculptors. The woman at the Village Green Gallery in Weston  is married to Nobushi Fuji’i, an accomplished photographer, and runs her gallery as a place both to exhibit his work and as a local community resource where meetings are held, films screened and computers are available to the public.

My response to all the art and artists was to go home and make my own work of art, in this case, a soup that was warming and delicious. 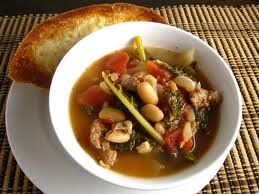 Cook sausage and onion in a large pan over medium heat until sausage is all cooked through to brown and crumbled into bits.  Try not to let bottom of pan burn.

Addd collard greens or spinach, beans and 4 cups water, season with salt and pepper. (About 1 T salt). Bring soup to a boil, then reduce heat and simmer until soup thickens a little, about 8 minutes. Stir in red-wine vinegar.

Serve with bread and cheese if you like. Stay warm!

This entry was posted in Uncategorized and tagged art, painting, sculpture, soup, Vermont. Bookmark the permalink.