Finding a wonderful museum in the middle of nowhere is like getting an unexpected present. The Wild Center, billed as the Natural History Museum of the Adirondacks, in Tupper Lake, NY, is bliss for any age. Designed and built six years ago by the same talented firm responsible for the Air & Space Museum in Washington, DC, the Wild incorporates exhibits with live otters, turtles, fish and other creatures; a glacier ice wall; interaction with highly informed guides and animals, (we saw a four year old male milk snake, a species erroneously named by farmers who found them in barns and assumed they drank from cows); and a theater showing Adirondack-related films one after the other. The first film had no voiceover, simply gorgeous photography of the area in all seasons with a musical soundtrack that managed to be both a peon to nature and a spiritual experience.  We also saw a film about tracking moose using special dogs who locate the scat which is then studied to figure out the DNA of each moose and another about climate change and how it’s affecting the area (badly, of course.) 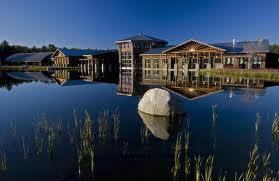 The Wild Center across the pond

It’s starting to get cold in the Adirondacks so we never got to the outdoor trails, ponds, Oxbow Marsh or the New Path that showcases new green technologies.  Spending most of a day at The Wild Center is easy and the only thing stopping me from returning next week is distance. 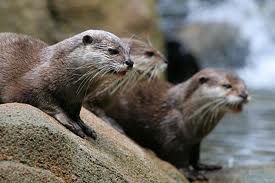 The otters reminded me of a coat I had years ago. Made of otter, it drove my young daughters crazy. They had seen the movie Ring of Bright Water and thought—rightly—that wearing the fur was horrific. I apologized to Louie, Squeaker and the other two otters at the Wild and watched them scarf down grapes, smelt and hardboiled eggs. They’re omnivores, an approach I can relate to.

In homage to The Wild Center, here’s a recipe for leek and wild rice soup, courtesy of the International Wild Rice organization. Wild rice is a grain that’s not related to Asian rice. WR is still harvested by Native Americans and others using a canoe to paddle into a stand of the plants and knock the grain into the canoes. It comes largely from the Great Lakes region, parts of Canada and Minnesota, Wisconsin and Michigan. 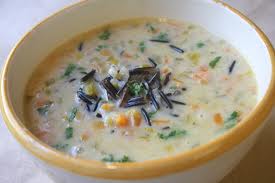 In large saucepan, cook zucchini, fennel and leeks in butter over medium heat 10-15 minutes.
Add 3 T. dill, chicken broth. Simmer uncovered 20 minutes.
Remove from heat, puree in food processor or blender (in batches if necessary).
When ready to serve, return to saucepan over low heat.
Add cream, adjust seasonings (adding salt and pepper as you wish) and heat through; DO NOT BOIL.

To Serve: In bottom of each shallow soup bowl, mound 1/2 cup wild rice in
the center. Ladle soup around rice and garnish with remaining dill.

One final picture of an otter who would probably relish a bowl of wild rice soup. 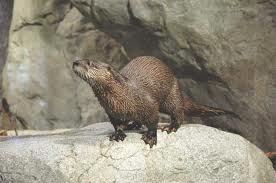 This entry was posted in Uncategorized and tagged Adirondacks, otter, snake, wild rice. Bookmark the permalink.