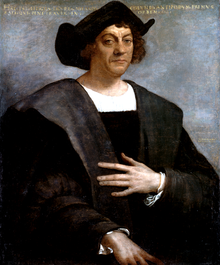 Christopher Columbus, who did not discover America (he was preceded by about five hundred years by Leif Ericson and maybe others), started Spanish colonization of what was called the “New World.” Born in Genoa, Columbus first sought funding from King John II of Portugal but no go. After trying and failing to interest Henry VII of England in his venture, he ultimately got an OK from King Ferdinand II of Aragon and Queen Isabella I of Castile, who assumed he would not return. Fredinand and Isabella were the monarchs who had united many parts of the Iberian peninsula by marrying.  (In those days, marriages could bring together whole countries, not just step-children and family pets.) 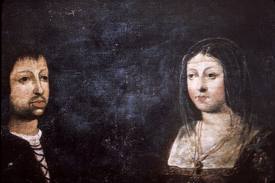 Ostensibly the wedding portrait of Ferdinand and Isabella

The Nina, the Pinta and the larger vessel, Santa Maria, departed from Palos de la Frontera in southwestern Spain and first reached the Canary Islands, then owned by Castile. After restocking the ships, about five weeks later, on October 12, 1492, a lookout on the Pinta  spotted land and alerted Columbus who later claimed he been the first to sight land in order to claim the lifetime pension promised by the royal sponsors  (proving that greed is hardly a contemporary quality.) The land turned out to be what we know as the Bahamas. The rest is, literally, history.

Now to fill in the blank: “Genoa-_____.” If you said “salami’ you get today’s Mari Gold/Will Shortz virtual award. 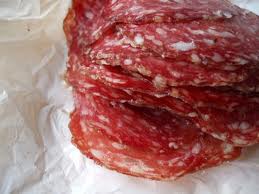 Genoa is a seaport so it’s famous for the quantity and quality of its fish. It’s also known for pesto, that divine paste made of fresh basil, pine nuts, garlic, Parmesan cheese and olive oil.  Genoa is also noted for pansoti, large ravioli stuffed with pesto or vegetables and herbs and often served with walnut sauce. 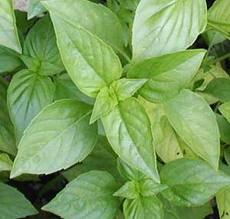 I make as much pesto as I can at the end of summer and freeze it in ice cube trays which are then popped out and stored in bags in the freezer for use as needed. Walnut pesto is a nice change from standard pesto on any kind of pasta.

1-2 garlic cloves (some recipes call for more; I’m not a raw garlic fan.)

Combine the basil with the walnuts in bowl of food processor and pulse a few times. Add garlic and pulse some more.  Slowly add the olive oil in a constant stream while the food processor is running. Stop it to scrape down the sides with a rubber spatula. Add the grated cheese and pulse again until blended. Taste and add salt and pepper if you feel it needs it. (Parmesan is pretty salty so I tend not to re-salt.)  Pulse until the pesto is well blended–it should be slightly oily and not at all dry–if dry, add a little more oil and pulse to incorporate it.

This recipe makes 1 cup which is enough for pasta for two -four people, depending on how saucy you like your pasta.  Remember, if you have more pesto than you can use,  it freezes brilliantly. 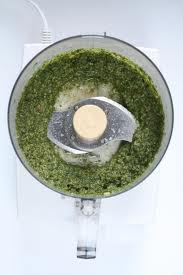 This entry was posted in Uncategorized and tagged basil, Genoa, pesto, salami. Bookmark the permalink.