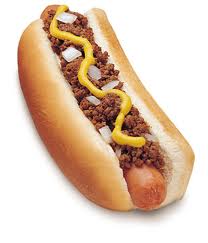 One of the factoids on the “About Iceland” video shown on Icelandair  is that the most famous restaurant in Reykjavik is a hot dog stand. It’s absolutely true–in business since 1937, it’s called Baejarins Beztu Pylsur which translates as “the best hot dog in town;” it’s located right in the center of Reykjavik but not on one of the uber-chic streets and there’s always a line waiting to be served and people sitting at the one, lone picnic table.  Bill Clinton ate there as have other notables and you can charge your dog to your credit card. 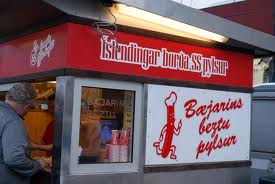 Turns out that the hot dog is an item of national pride among Icelanders who eat them at every opportunity–this in a city with a gazillion restaurants of every type and price range.  I didn’t sample an Icelandic hot dog because the time never worked out but I did in Copenhagen, where the generic term is polsevogenor  or sausage cart. 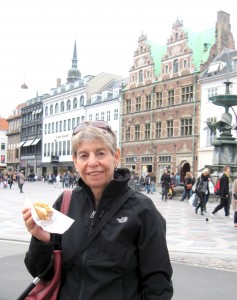 Outside the Royal Copenhagen store, hot dog in hand

The Danes turn out to be as wild about franks as the Icelanders.  I chose between five or six different kinds of dogs–long and thin, short and fatter, and made with different ingredients (which I didn’t fully grasp.)  I opted for the standard version and asked for mustard and fried onions which are dispensed from a machine that drops them onto the dog.  It was delicious and, at about $4.50, the least expensive thing I ate at any meal in Copenhagen. Later, I learned that hot dogs are a big hit in all Scandinavian countries. To raise the tone here, weiner, the word for hot dog,   derives from from the name Wien, the Austrian name the city  English speakers call Vienna. Basically, it’s a sausage, whether from Wein or West Iceland. There’s a hot dog variant in almost every country world wide.

However, dear readers, you don’t need a recipe for grilling or boiling a hot dog.  Instead, here’s one for an excellent soup that incorporates frankfurters. 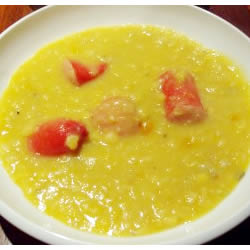 Yellow Split-Pea and Frankfurter Soup--eat up!

1/2 teaspoon ground mace (if you happen to have it on hand–my mace supply is low, mercy me)

Heat olive oil in a large pot over medium heat. Stir in onion, carrot, celery, and garlic; cook to soften, but not brown, about 7 minutes.

Mix in the mace and split peas. Stir in the stock; cover, and simmer for 1 hour, or until the peas are soft.

Season with salt and pepper. Stir in frankfurters, and heat through.

Makes a great meal as the weather turns colder with a salad, bread and cheese.