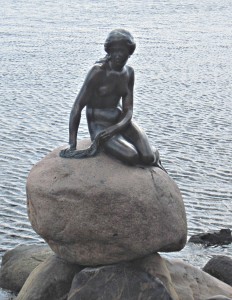 Among other attributes, Copenhagen is famous for the Royal Danish Ballet, smorrebrod (open-faced sandwiches) and the Little Mermaid statue in the harbor that didn’t attract much notice until the 1952 Danny Kaye movie, Hans Christian Anderson. The statue is always mobbed by tourists taking her picture; the Ballet spends as much time on tour as at home and the smorrebrod is  fabulous. I had a sampling at the Dansk Museum of Design, a sort of Cooper-Hewettesque gallery-cum- shop and enjoyed every bite. 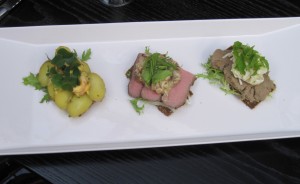 Rosenborg Castle, right in downtown Copenhagen, began as a summerhouse and is one of the many projects of Danish King Christian IV, one of Denmark’s favorite royals. Built starting in 1606, the Castle (“Slot” in Danish) is in the Dutch Renaissance style and is surrounded by a beautiful park where I assume roses grow in profusion in summer. Inside are numerous rooms and galleries, most displaying over-the-top furniture, porcelains and some terrific tapestries and ceilings. The crown jewels and other royal regalia are in an area all to themselves and are fairly eye-popping bling. 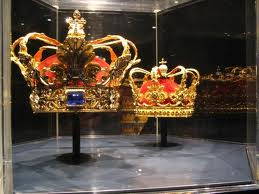 A smattering of the Danish Crown Jewels

You can choose from any cuisine you wish in this very cosmopolitan (and expensive) city but I stuck with Danish which runs the gamut from old-school, meaning cholesterol-watchers should steer clear, to very chic, ‘nouvelle’ Danish. Frk. Barners Kaelder,. (www.frkbarners.dk)  is a terrific example of old-school, where I had wiener schnitzel (and was told that Denmark vies with Austria as to where the dish originated) which was greaseless and came with peas, fried potatoes, grated fresh anchovy garnished with herring and lemon and was so delicious I was sorry I couldn’t begin to eat it all.

At a restaurant that shall go nameless because it was so loaded with attitude, I had an amazing “organic” trout with a twist—literally. It arrived with a small fork wound into the skin on top. The water leaned over my plate and twisted the skin off the fish, rather like peeling back the top on a can of anchovies.

The Danish National Museum is a gigantic building presenting Danish history from the earliest days down to modern times, all beautifully displayed and with excellent information about the objects. 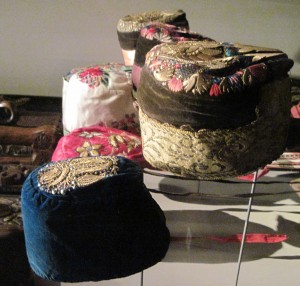 There’s no way to take it all in but, after two+ hours, we had only scratched the surface and needed a little retail therapy break so we went to the Royal Copenhagen store, housed in a fabulous old building.  The visit was all about looking because the prices for everything from porcelain to a sandwich  are astronomic.

Here is a recipe for Caramelized Potatoes.  Danish winters are cold so people glom onto food that will stick to the ribs. 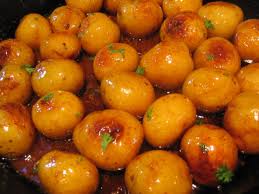 About 1 1/2 lbs. small white or yellow-fleshed potatoes (the smaller the better)

Boil potatoes with skin on until tender. Let them cool enough to be able to peel without burning your fingers.

Put sugar in a frying pan. Put the butter on top of the sugar. Turn on low heat and stir as the sugar melts and begins to brown. When it is caramelized, add the potatoes, constantly turning them until the syrup sticks to them. (This takes 5-10 minutes.) Serve and don’t apologize for the calories.  These potatoes go well with any hearty entrée like duck, beef, pork—even chicken. A little aquavit helps wash it down, at least the Danes think so.

This entry was posted in Uncategorized and tagged Copenhagen, herring, mermaid, potato, trout. Bookmark the permalink.