Fall for Dance, City Center’s festival of moderately-priced eclectic offerings, returned to a wildly enthusiastic crowd more than ready for live entertainment.  Even without the urging of Felix Hess, Emcee of the opening act, to “make noise” the audience was revved up and ready to roll in the full we’re back spirit.

Streb Extreme Action opened the evening with electronic music and the circus plus a cheerleading-esque routine. The curtain rose on three performers poised high above the stage atop a metal unit that looked like a gigantic Erector Set. Their boots were strapped to the top bar enabling them to revolve forwards and backwards highlighting abs of steel. Later, the entire troupe in asexual steel blue unitards bounced creatively on a huge trampoline before landing on crash mats with a sickening thud. While it was exciting to watch the athletes flying and posing in the air, the whump as they landed with outstretched arms was terrifying. There was more fear and tension as the company leapt from the trampoline in twos and threes so that a mid-air collision seemed entirely possible. 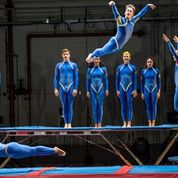 Interspersed with the performance and covering the breakdown of the equipment, Hess worked the crowd, urging them into a stadium wave and shooting T-shirts into the audience.

Cheers to the performers for technical flair and a fervent hope that they avoid injury.

Our Indigo: If We Were a Love Song, was set to music by Nina Simone performed by A.I.M. by Kyle Abraham, a company “galvanized by Black culture and history.” In Little Girl Blue, Gianna Theodore displayed sinuous limbs and lovely flow; too bad the choreography was so earth-bound because, on the few occasions she was upright, her impact was much stronger.  Emotional pain was suggested throughout the work but, except for a few group tangles and the exaggerated chest contractions of Jae Neal in Don’t Explain, the effect was murky. None of the pieces, all choreographed by Mr. Abraham, went anywhere even as the superbly conditioned dancers bent, rolled and occasionally reached out for one another. The group spent too much time on the floor to make their movements fully visible which diminished the total effect. If Indigo were a painting it would be a dark central blob with a few elongated curls that would not make me spend a long time in close examination. 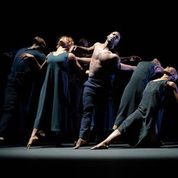 Last up was Sweet Gwen Suite, a recreation of three Bob Fosse works from the 60s’ choreographed for Gwen Verdon. Their daughter, Nicole Fosse, credited as Artistic Director, said she intended the work as homage especially to her mother.  Dancing Verdon, Georgina Pazcoguin, a New York City ballet soloist, is very unlike her physically, a smart call to avoid that particular comparison. Pazcoguin rendered the hip thrusts, shoulder pops and other hallmarks of Verdon’s dancing and Fosse’s choreography admirably but minus the sense of impish fun that Verdon injected.  Zachary Downer and Tyler Eisenreich completed the trio in the right tone but it was true Gwen-ness we were waiting for and didn’t quite get. We did get style and an angled sombrero, part of the reimagined original costumes with plenty of glitz from costume designer Bobby Pearce. The three go-go numbers were fun but the real Verdun/ Fosse team was boffo. 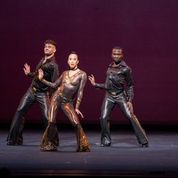