As in the East River via the NYC Ferry which does an admirable (yes!) job. On Sunday, departing from the East 90th street landing, the boat zigged and zagged to Astoria, Roosevelt Island, Long Island City and East 34th street before docking at the Brooklyn Navy Yard, my destination. People boarded with dogs, babies and bikes on a perfect day——the air was cool as befits early fall but warm enough to sit outside on the top deck. 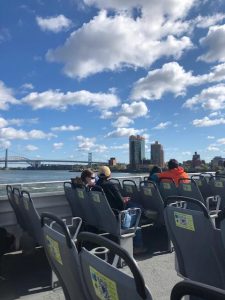 The Navy Yard was on the Open House New York ‘open access’ list so a friend and I figured more areas there than usual would be viewable. Wrong.  Many, but far from all, of the indoor food stations were open and there were a few half-hearted demonstrations of carpentry and art that we passed by. There were two or three food trucks. In terms of visitors, there weren’t a ton in marked difference from my experience as an OHNY volunteer the previous day at  1014 Fifth Aveue opposite the Met Museum.

The Yard opened in 1801; served as America’s premier naval shipbuilding facility for 165 years, and was at its peak during WWII. In 1966 it was decommissioned and sold to the City. Now it is an industrial park with some very old buildings and many new ones. At the end of our visit we bought beers and sat outside sipping. We passed up very good looking Vietnamese banh mi sandwiches (offered in both the regular and veg versions) because the timing was wrong. 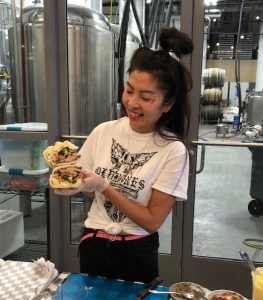 Getting to the Navy Yard was more than half the fun. Too bad there isn’t an audio guide describing what you are passing as well as what buildings used to be there but regardless, the skyline on both sides of the river are interesting and ever-changing.  Long Island City is sprouting skyscrapers and everywhere are examples of both good (rare) and terrible (plentiful) urban architecture.

It’s not the same as the New York of my childhood but it’s still a pretty wonderful town.

Here’s how to make a non-authentic and delicious banh mi: 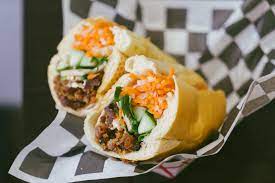 (This serves 6. Cut back ingredients for fewer servings)

2 to 3 tablespoons sriracha or other chili sauce, to taste

4 garlic cloves, finely chopped (not in my house)

½ cup chopped fresh basil (if you have it on hand)

6 small hero rolls or 2 baguettes cut into thirds, split (if you choose baguettes get very fresh ones)

Fresh jalapeño, thinly sliced and seeded, for serving (or not)

Mint sprigs, for serving (you can opt out  —I would)

Cilantro sprigs, for serving (also opt out of this but that depends on your cilantro position)

This is in no way authentic but delicious.  Beer goes well with it as would champagne or tap water. Hum Anchors Away if you’re so inclined.

This entry was posted in Uncategorized and tagged beer, New York, ship. Bookmark the permalink.

4 Responses to On the Waterfront