May the Road Rise Up to Meet You… 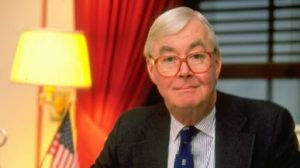 In a fit of ‘here’s to 2021’ partly inspired by The New York Times, during the seemingly endless New Year’s weekend, a friend and I went to the brand-new Moynihan Train Hall. Governor Cuomo called the building “deeply hopeful” and I concur. It is airy and full of light in large part due to the 92-foot high glass ceiling. Right now even the floor is sparkling clean. 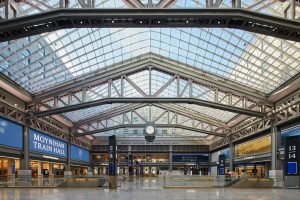 The station is named after New York Senator Daniel Patrick Moynihan, originally from Tulsa, OK., who had a long, illustrious career you can check out here: https://en.wikipedia.org/wiki/Daniel_Patrick_Moynihan and elsewhere. Public intellectual, sought-after speaker and much more, the Farley P.O., (where during The Depression Moynihan shined shoes as a boy), was renamed after him, a fitting tribute as he championed the renovation project.

Stained glass ceiling –but where?

However, I have a bit of an issue with The Times. The article, a two page spread with four-color pix, touted in glowing terms the backlit, stained glass ceiling which nods to the Sistine ceiling with a woman pointing her finger set among break-dancers wearing sneakers. I asked four (no kidding) uniformed guards at the station to direct me to this work. Despite going up, down and every other possible way I couldn’t find the artwork. If it is intended as a draw, perhaps it should be made a tad easier to locate?

Penn Station reminds me of my mother and father who took me to the train to go to summer camp in Maine. Back in the day that train left from the station’s Well, an area in the neither regions where it was particularly hot and dusty. Inevitably, Mom loudly announced that it was a “horrible place to be on the hottest day of the summer.” I would have given anything to become invisible.

Here, in honor of Moynihan’s Irishness, is a recipe for Irish Stew: 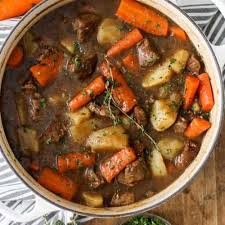 Put 1/3 cup flour in a large resealable plastic bag. Add lamb, a few pieces at a time, and shake to coat. In a Dutch oven, brown lamb in batches in 2 tablespoons oil. Remove and set aside. In the same pan, saute onions in remaining oil until tender. Add garlic if using;  cook 1 minute longer.

Add broth, stirring to loosen browned bits from pan. Return lamb to the pan. Bring to a boil. Reduce heat; cover and simmer for 1 hour or until meat is tender. Add potatoes and carrots; cover and cook for 20 minutes. Stir in peas; cook 5-10 minutes longer or until vegetables are tender.

Add seasonings and Worcestershire sauce. Combine remaining flour with water until smooth; stir into stew. Bring to a boil; cook and stir for 2 minutes or until thickened.

The idea beverage would be Guinness. Hate beer and all things similar? Red wine. Or Coke if you must.

This entry was posted in Uncategorized and tagged Guinness, Irish, lamb, Penn Station. Bookmark the permalink.

12 Responses to May the Road Rise Up to Meet You…