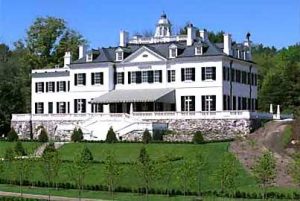 As in Wharton. And, no, not poor in terms of her finances nor her talent but in aspects of her life. Yesterday I picked up a friend visiting me in Vermont in (relatively) nearby Lenox, MA; after  she arrived  we went to Wharton’s home, The Mount.

There’s something sad about the house—it’s very still as though no one had fully lived there which is true. Edith’s life didn’t have a great start. Per our guide at the Mount, she may not have been her father’s daughter although he was good to her in contrast with her cold, unloving mother.  Edith was also a great example of ‘smart women, foolish choices’ in terms of the men in her life.  Her first engagement “ended.” Her husband, Teddy, was twelve years her senior, belonged to her social class and bipolar. Photos show him cuddling some of the small, yappy-looking dogs both he and Edith cherished.  I doubt if Teddy ever cuddled Edith. Towards the end of the marriage, in 1907, Edith was introduced by Henry James to Morton Fullerton with whom she fell in love; the relationship was rather one-sided as Fullerton didn’t return her affection; was chronically unfaithful to many women and bisexual. When her marriage disintegrated, Edith moved permanently to Paris.

The Mount, designed and decorated by Wharton who had previously-co-written and published the 1897 classic, The Decoration of Houses, is intensely formal.  From the outside, every window has classic shutters except for three: one closed because, (per our guide), “Wharton didn’t want people to see into Teddy’s bathroom,” but you would have had to be twelve feet tall to do so. Another closed shutter conceals a closet; the third semi-conceals ugly stairs.  The gardens are rigid lines of hedge with some areas given over to flowers.  The dining room, set as though Henry James and other literary notables of the 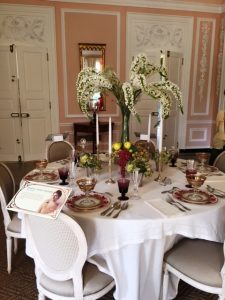 times were all coming to dinner at once, is a lovely room; the wood paneled library is dark with Edith’s desk in the middle. Edith wrote in bed surrounded by her dogs (one of the few aspects of her life I felt like cheering.) 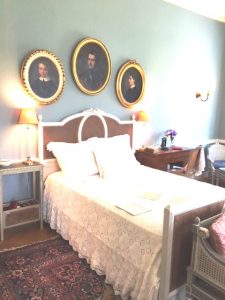 Since I last saw it about five years ago, The Mount has been greatly refurbished with   more furniture, pictures and facsimiles of Wharton’s work as in the handwritten pages of The House of Mirth strewn on the bed. Keep up the good work, Edith Wharton Restoration, Inc. but do encourage your guides to gush less and present a more honest picture of the house’s owner.

This recipe has no Wharton connection but  I made it in Vermont. Not difficult,  cute-looking and tastes good, 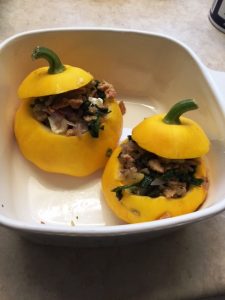 Healthy dash oregano, healthy dash basil or just use Italian seasoning as I did because that was on hand in the house.

Salt and pepper
(Note: you could also add any of the following: chopped tomato, sausage, bacon, corn cut off the cob.)

This amount serves two. To increase, add about ¼ cup ingredients for each additional pattypan squash.

Cut top of squash. Take out insides just as you scoop a pumpkin to make a jack-o-lantern (i.e., carefully). Steam the squash about 15 minutes or until tender.

In saucepan, heat olive oil and add kale, onion and Italian seasoning and cook for about 5 minutes. Add to bowl with breadcrumbs and feta and mix all together. Stuff squash. Put in oven-proof dish and bake about 15 minutes at 350.

Given Wharton’s social class, serve with champagne. Or kick over the traces and serve with white wine of your choice.

This entry was posted in Uncategorized and tagged olive oil, squash, The Mount, Wharton. Bookmark the permalink.