This title has no relation to the film; it’s how I felt several times during last week at Chautauqua.  If anyone said a cross word I didn’t hear it; when someone dropped something, inevitably others swooped in to pick it up.  It was niceness on steroids, a far cry from snarky, sometimes cranky, always opinionated New Yorkers.

The Chautauqua population skews older, (read plenty of gray hair, walkers and scooters), although there are lots of families with kids and dogs everywhere. Many houses are privately owned but others are rentals where visitors return year after year for a dose of concerts, theater, dance, literature and lectures. Chautauqua was started in the late 1800s by Methodist ministers so there’s a healthy dose of God in many forms, largely Christian but Judaism and other spiritual practices are part of the mix.

Each week has a theme; the week I visited it was “The Ethics of Dissent.” Every day brings lots to do, so much so that many times a choice is required. I went to several concerts and a rehearsal by the excellent Chautauqua symphony; saw a wonderful production of Candide; went on a nature walk (learning that naturalist Euell Gibbons built up an 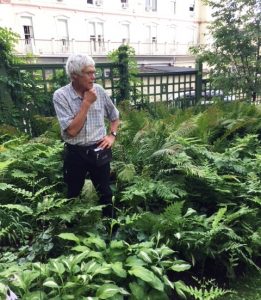 immunity to poison ivy by eating small amounts daily until he could tolerate three large leaves –why bother? ); heard several poets and writers read from their works; visited the fabulous library; fiddled with my watercolors; did a little, mild shopping for sandals; went to a seminar on living wills; trotted around the 750-acre 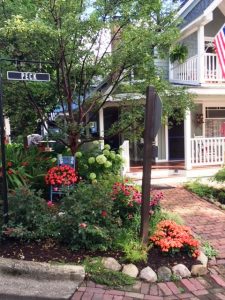 Institution admiring the gorgeous gardens and took a daily Pilates class. (I could also have kayaked, sailed, played tennis or golf, gone to the art gallery, meditated in a class, baked challah and more.) One of the week’s highlights was NY Times reporter Barri Weiss discussing her take on the “new” seven dirty words, (the original ones were the creation of George Carlin, based on those that couldn’t be said on television.) This is a link to Weiss’ talk which I highly recommend: https://www.youtube.com/watch?v=NHaZOD-KxxA  She’s articulate, entertaining and knows how to address a crowd.

I stayed at The Englewood, a guest house located very near the Amphitheater. The house is 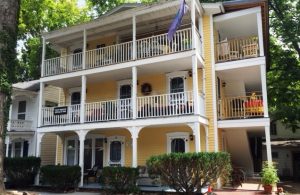 old, nicely renovated and cute; my little first floor apartment was perfect for one (two in a pinch—literally) and I ran into other guests who were fun to be with.  Olivia, who owns Englewood, is deeply invested in natural, organic foods and practices. One day’s breakfast were the lightest pancakes I ever ate; another morning she produced a sort of tart she says is based on Paleo zucchini bread. This is her recipe but it doesn’t have ingredient amounts because she’s an intuitive ‘dash of this, pinch of that’ kind of cook. 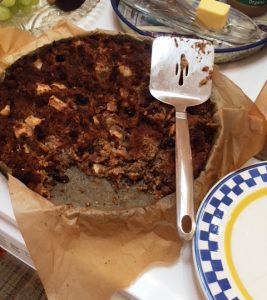 Mix all together. Flatten into a circle on parchment paper. Bake at 350 for 15-20 minutes.

And good luck. I’m not a Paleo person but this was delicious. With it, we were offered tea, coffee and oj. And the daily activity schedule.

This entry was posted in Uncategorized and tagged apples, nature, Pilates, poison ivy. Bookmark the permalink.