Iolanthe, The Mikado and More

Gilbert & Sullivan fan(atic) that I am, over the weekend I took my almost-sixteen-year-old granddaughter to Iolanthe. She wanted to see The Mikado which I was all for but the G&S company (that shall be nameless) had pulled that production because they’d had pushback from a Japanese group. I sent them a stiff email pointing out that Mikado pokes fun at English mannerisms and institutions of the late 19th century (the program opened in March of 1885.) Also asked them how come King and I is running on Broadway–where is the irritated Thai lobby to point out that much of this show makes the court of Siam look ridiculous (remember the scene in which the royal wives, wearing crinolines for the first time, reveal to the British guests that they aren’t wearing underwear?) 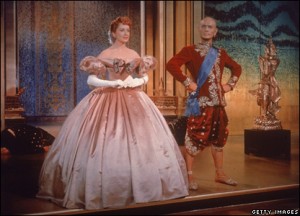 Constance Carpenter (?) and Yul Brenner in King and I

Needless to say, my annoyance didn’t change the outcome so Iolanthe is was, at the NYU Skirball Center. I think, from what a woman at the table peddling t-shirts and such told me, that NYU was partly responsible for The Mikado cancellation. The power of today’s college students!

Iolanthe has some slowish parts but overall it was a really splendid production. There were a few other teens in the audience and some little kids but mostly there were us older folks, all big G & S fans. Several of us agreed that we’d never seen the Nightmare Song in Act II (When you’re lying awake with a dismal headache, and repose is taboo’d by anxiety, I conceive you may use any language you choose to indulge in, without impropriety…) better performed. Bravo James Mills. Click here for a nice performance by another Lord Chancellor.

For those not up on it, Iolanthe satirizes British politics and concerns a band of immortal fairies who become entangled with the House of Peers, a bunch of brainless snobs. The whole must be taken with a good handful –a grain would not suffice– of salt and includes some wonderful numbers including When Britain Really Ruled the Waves which the Anglophile in me adores.

And what do you eat while you listen to Iolanthe? (at home via YouTube or similar.) Fairy cakes, obviously, which are the Brit way of saying cupcakes. You know how to make a cupcake, right? Instead, especially if you’re inculcating a child, make: 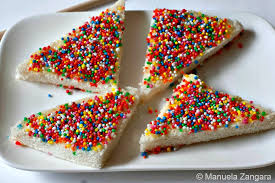 White bread (what else? Go another step and cut off the crusts. Go mad and use cookie cutters to render the bread into shapes.)
Butter
Sprinkles, the glitzier the better.

Butter the bread, lavishly cover with sprinkles and serve. Yes, you can do this. A four year old or even younger can make it–and eat it and have a delightful sugar high. While the tot has a glass of milk what you need is a nice brandy, a stiff vodka or your tipple of choice. Here’s a howdy-do, as G & S often wrote.

This entry was posted in Uncategorized and tagged bread, cupcake, Gilbert & Sullivan, sugar. Bookmark the permalink.

7 Responses to Iolanthe, The Mikado and More