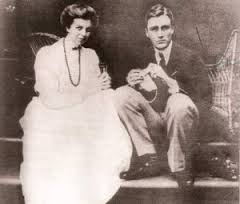 Eleanor and Franklin before they married

The village of Hyde Park is about an hour and a half north of NYC, a lovely drive especially when fall foliage is at peak or close. The official name of the home where FDR was born, lived and is buried is Springwood. A visit there begins with a park ranger providing opening commentary and then escorting groups to the house where you shuffle through—it’s dark to preserve the contents and rather impersonal. I searched for mementos of Fala, the President’s Scottish terrier, with no luck (although am told they are on view in the Presidential Library–see below.)

After Franklin married Eleanor, ( his fifth cousin), in 1905, the couple lived at Springwood with Franklin’s mother, the dragon-esque Sara Delano. While FDR’s room is spacious with a beautiful view, (anything for Sara’s cherished, only child), Eleanor’s is tiny and crammed in between Franklin’s and Sara’s with a cramped day-bed wedged into a corner. Eleanor never felt at home at Springwood and this room is a shining example of why. 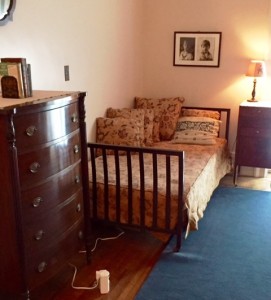 Roosevelt’s will left instructions to create the first presidential library, (today there are thirteen with Obama’s still to come.) Years ago I saw the old Roosevelt library that was far more homespun with items like FDR’s desk and wheelchair; this high-tech version is excellent but grandiose with exhibits on the New Deal, WWII, etc.
Outside In the rose garden is a large white stone marking FDR’s grave where  Eleanor is also 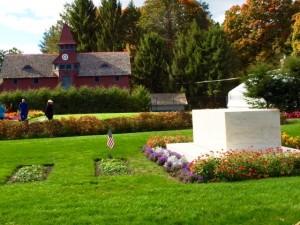 buried. Directly in front of the stone–also unmarked–are two smaller graves, one belonging to Fala, the other to a dog owned by Anna, Roosevelt’s daughter.

And then there’s Val-kill Cottage. Only two miles away, this was the only living space Eleanor personally owned. (In 1918, after Eleanor found letters revealing FDR’s affair with Lucy Mercer, her social secretary, the marriage morphed into a political partnership — it’s said that Eleanor never liked sex in the first place, six children notwithstanding.)
In Val-Kill, Eleanor lived as she pleased, using bridge chairs for the overflow at the casual buffets she served guests including John Kennedy and Winston Churchill and often hitting the hay on her open-air sleeping porch. The rooms are a hodge-podge of furniture—nothing, including fabrics, matches– but far more personal and intimate than rather imposing Springwood. 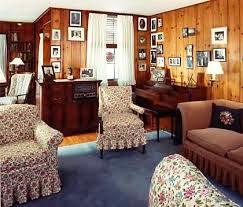 f found the houses, especially Springwood, more interesting than delightful. Campobello, which I visited last summer, is far more charming, probably the difference between a summer ‘cottage’ and a stately, presidential home.

Apparently, one of FDR’s most-loved foods were scrambled eggs. Figures, right?
Should you be at a loss to produce this easy, always satisfying dish, here’s the deal:
Scrambled Eggs for Two
4 eggs
1/4 cup milk (2% or what have you although full fat milk makes the best eggs)
Salt and pepper
2 tsp. butter

Beat eggs, milk, salt and pepper in bowl until blended.
Heat butter in large nonstick skillet over medium heat until hot. Pour in egg mixture. As eggs begin to set, gently pull eggs across the pan with a spatula (wooden is nice but no-stick is fine as well), forming large soft curds.
Continue cooking – pulling, lifting and folding eggs – until thickened and no visible liquid egg remains. Do not stir constantly. Remove from heat and serve immediately.
Don’t use a cast iron pan as this can make eggs turn greenish. It won’t hurt you but doesn’t add to the appeal. For a jazzier version add cheese like pepper jack or add salsa. Unless this is a celebratory moment, you’ll probably serve your eggs with coffee (although Franklin also loved a good Martini.) Both Franklin and Eleanor felt food was necessary to keep a body going, not something to wax rhapsodic over. Complex man, simple in terms of food.

This entry was posted in Uncategorized and tagged dog, eggs, FDR. Bookmark the permalink.

3 Responses to Franklin and Eleanor Redux