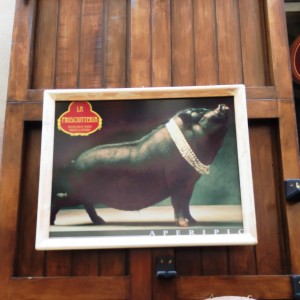 Prosciutto on the trotter adorned with pearls

Much has been written about Rome’s neighborhoods especially Trastevere, an adorable area on the west bank of the Tiber. It’s full of restaurants, shops (many selling merch that could also be picked up anywhere in the urban world) and churches like Santa Maria in Trastevere 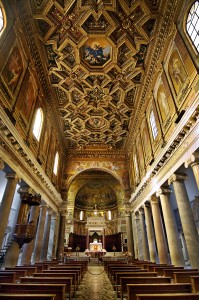 that dates from the 4th century AD and has been restored under many popes. Inside are wonderful mosaics from about 1140 as well as stone steps worn in the center attesting to the feet that have trod them over centuries. The church has many columns, some said to be taken from the Baths of Caracalla, as well as a 17th century wood ceiling.
Signs throughout the church say (or indicate) “no photograph” but since several nuns were busy snapping (although no selfies), I turned off the flash and went ahead. 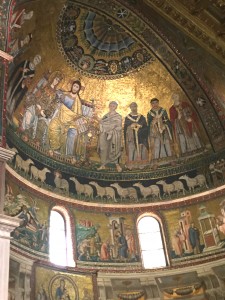 Leaving the church, we wandered the streets hoping for a loo and miraculously stumbled into a cute shop selling mostly bath stuff. The helpful owner let us use the facilities which made those on a plane look generous. In return, we unloaded a few euros for some goods.

Sort of bohemian Monti, (named for one of Rome’s seven hills), is a residential area with prime real estate that sells to the well- heeled. What was once seedy has become über chic with the requisite cobblestone streets and a largely hip, young crowd. Via del Boschetto is an especially delightful street built on a hill and lined with small shops where artisans peddle their wares, a welcome relief from other areas that showcase international brands. The area is less crowded and less touristy than Trastevere although weekends can bring mobs.

Although I’ve been in Rome many times, I hadn’t been to the Forum since teenhood so late one afternoon braved the Metro. It turned out to be a cinch once I figured out the ticket-buying process. I skipped the Coliseum in favor of  strolling to admire the 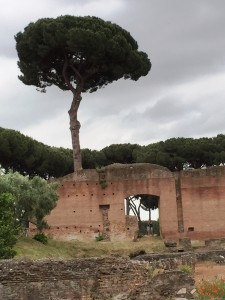 A quiet corner of the Forum

ruins and savor the ancient feel, easier in sections that weren’t full of people. It was a nice, nostalgic visit to what has been hailed as “the meeting place of the world.”

The Romans prized the dormouse as a delicacy–usually a snack– but thankfully this does not appear on modern menus. What does is Cacio e Pepe, one of the simplest, best pastas ever. This recipe comes from my cooking hero Mark Bittman. 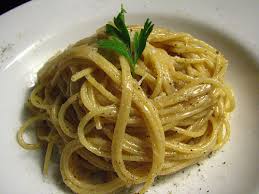 Put a pot of salted water on to boil. In a large bowl, combine the cheeses and black pepper; mash with just enough cold water to make a thick paste. Spread the paste evenly in the bowl.
Once the water is boiling, add the pasta. The second before it is perfectly cooked (i.e., not yet al dente), use tongs to quickly transfer it to the bowl, reserving a cup or so of the cooking water. Stir vigorously to coat the pasta, adding a teaspoon or two of olive oil and a bit of the pasta cooking water to thin the sauce if necessary. The sauce should cling to the pasta and be creamy but not watery.
Plate and dust each dish with additional pecorino and pepper. Serve immediately.

Veni, vidi, vici said Julius Caesar (possibly apocryphally ) and you can conquer this one, too.

This entry was posted in Uncategorized and tagged olive oil, pasta, Rome, Trastevere. Bookmark the permalink.

2 Responses to More Roman Around