Jane: Her Own Urban Legend 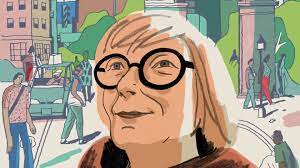 As in Jane Jacobs, urban planner, writer and activist who argued that urban renewal didn’t respect the lives of city dwellers. Jacobs stood up to Robert Moses who wanted to overhaul Greenwich Village where she lived and helped cancel plans for the Lower Manhattan Expressway which would have wrecked what today is Soho along with parts of Little Italy and Chinatown.

Jane is recognized on a weekend in May all over the world. In New York City the Municipal Arts Society organizes a group of free, docent-lead tours knows as Jane’s Walk. I went on one that more or less centered around the East River. Although I’ve lived here my entire life, I didn’t know about the fire on June 15, 1904 on the paddlewheel boat the General Slocum.  The fire’s cause was possibly a carelessly discarded match; of the 1,358 passengers, many of whom were women and children, 1,021 died, largely because they couldn’t swim and were hampered by the heavy clothing of the day.

I also didn’t know (or forgot) that York Avenue was named for Sergeant Alvin York, one of the most decorated soldiers of WWI. TCM fans probably know the 1941 movie, Sergeant York, staring Gary Cooper which brought him that year’s Oscar for Best Actor.

One more Jane-related factoid: Since its founding in 1901, Rockefeller University has produced twenty-six Nobel Prize winners.

Having tried and failed to find a recipe with “city” in it (if you come across one I’d love to hear) I’m going with a Manhattan. 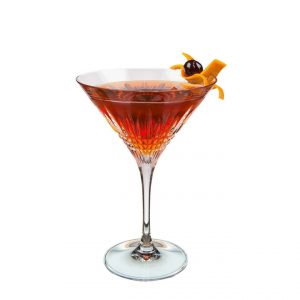 2 ounces rye whiskey (or bourbon if you prefer)

Add the bourbon (or rye), sweet vermouth and both bitters to a mixing glass with ice, and stir until well-chilled.  Strain into a chilled coupe. (I doubt that you will be struck by lightening if you use a glass.} Garnish with a brandied cherry (which everyone has around the house) or a lemon twist.

Before your first sip raise your glass to Jane.

This entry was posted in Uncategorized and tagged boat, cocktail, orange. Bookmark the permalink.