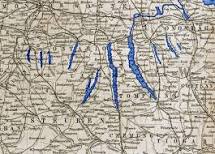 I.e., fingers as in the Finger Lakes. I rented a terrific house in Naples, NY, selected because the town is roughly mid-way between where my older daughter lives and my granddaughter is working at her college this summer.

The first day we went to Grimes Glen, known for its three waterfalls. You’d have to be a more intrepid water-walker than I to see them all but we got fairly close to the first one. Minus family I visited Conklin’s Gully where people have built stone cairns. 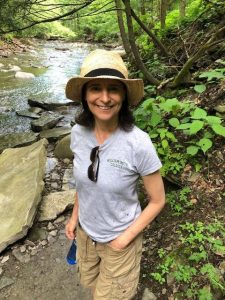 Grape pie is one of the touted foodstuffs of the area, made by several local bakeries. We bought one and, while it wasn’t terrible, I’d take blueberry, apple or cherry any time. 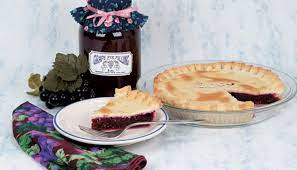 One night we had dinner at Park Inn in Hammondsport where the seafood “stew” was fabulous. Earlier we had lunch at the iconic Ruth and Bob’s diner in Naples, straight out of the 50s complete with orange bar stools, linoleum on the floor and servers in their sixties and up. The food is unremarkable but the step back in time is priceless.

Wineries abound here although most of the local wine is pretty bad. Hunt Country Vineyards has a gorgeous setting brightened with magnificent hollyhocks although their wine would work better as  as a substitute for vinegar in salad dressing.

One day I drove—in pelting rain so heavy there were times I could barely see the vehicle in front of me- to Aurora on Cayuga Lake. The town is on the National Registry of Historic Places with several inns that were originally mansions. Wells College is here and just outside the town sits MacKenzie Childs, home of pricey, whimsical, ultra-cutsey table ware and other things I did not buy. 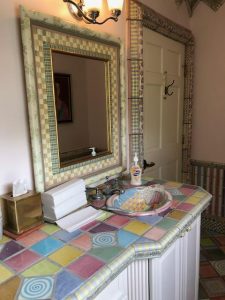 Even the bathroom at MacKenzie Childs is cute

I particularly like the paperweight display and glass history exhibit at The Corning Museum of Glass. The current display linking wine and glass was meh but the glass-blowing demo was great with a woman blower who made it look easy.

Native Americans were in this area (and elsewhere) long before Columbus so a visit to the Ganondagan Center in Victor was a must. The museum is small, the introductory film explaining the Seneca take on the origin of the world a little Disneyfied and the (reproduction) longhouse not to be confused with Motel 6. The site’s curator was a very informative guide. 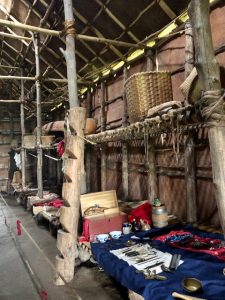 Ladder in the longhouse

Apparently lacrosse is based on games played by various Native American communities as early as 1100 AD. Outside the longhouse is a Three Sisters garden planted with corns, squash and beans.

Originally I’d thought to offer a recipe with ladyfingers but they can be hard to find. Instead, here’s one for fingerling potatoes. 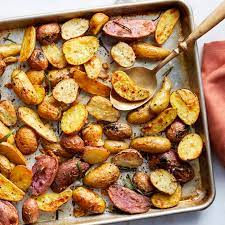 Melt butter (I use microwave but that’s your call)

Cut potatoes in half lengthwise.  Add olive oil to butter in a bowl with salt and pepper. Roll potatoes to coat.

Put potatoes on baking sheet cut side down and roast until tender and golden brown flipping halfway. Roast about 25 minutes

Serve with any meat or poultry. Or serve warm with drinks. Listen to Billy Joel sing and play New York State of Mind. https://www.youtube.com/watch?v=ol0dPJdzm1M

This entry was posted in Uncategorized and tagged fingers, New York, potatoes, wine. Bookmark the permalink.