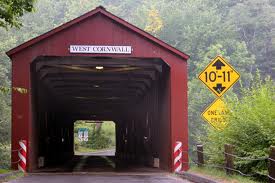 Among the boldface names we did not visit in Cornwall, CT were actors, Oliver Platt and Sam Waterston, or composer Tom Jones. We did spend time with a friend who owns a very old, lovingly restored house with a huge meadow out back, a perfect setting from which to watch the sunset.

Cornwall  dates to 1783 when the land was auctioned off and named after an English county.  The town was incorporated in 1740 and has a history of missionary work in the Sandwich Islands. During the 1820s,  the marriage of two local girls to Indians attending Cornwall’s Foreign Mission School led to a near riot and the school was closed. The town’s history is well documented in the small Cornwall Historical Society on Pine Street.

One of our weekend activities was a visit to the Saturday Farmer’s Market where Carol Bonci sells many kinds of bread including gluten-free loaves that taste surprisingly good. 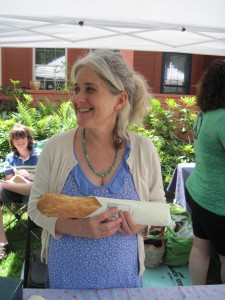 Carol Bonci with one of her baguettes

I could happily go to a Farmer’s Market every day of the week if only to see the gorgeous vegetables and flowers. We also went to an all-Cornwall rummage sale where I scored a Dust Buster in A-1 condition for $8 for my daughter whose own DB recently gave up the ghost. We biked, we read, we considered swimming but never quite got there, we visited the Cornwall Country Store now under new ownership, and man did we eat! One night, our host grilled an assortment of sweet and hot Italian sausages, red onion and a vibrant orange pepper which was accompanied by potato salad topped with sliced tomatoes and a dish of feta and olives for a beautiful Mediterranean supper. 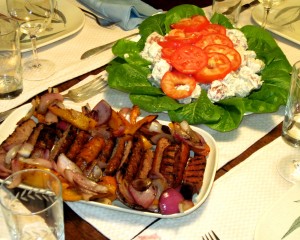 most of our Mediterranean medley

The first night we dined on Chicken and Eggplant Parmesan that I made using a Mark Bittman recipe with some minor tweaks. Mr. Bittman is my culinary hero—every recipe I’ve ever made following his instructions turns out perfectly and he never starts  by suggesting that you must incorporate “two persimmons grown on the southern end of Crete.” Everybody now… join in a chorus of “Pretentious, Pretentious” to the tune of “Tradition” from Fiddler on the Roof.

Here is the recipe with fervent thanks to Mark Bittman. 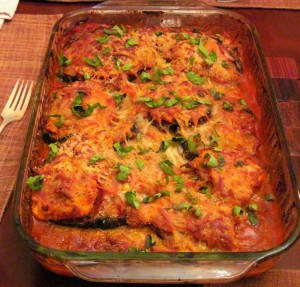 Pour a nice glass of wine and enjoy dinner.