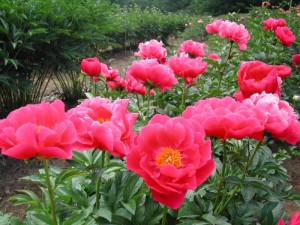 Inspired by the exquisite white-with-raspberry-accented peonies in crystal containers at a luncheon, I decided my Vermont garden needed a white peony.  Peonies are my all time fave flowers and the four plants I already have are deep to pale pink.

Off we went to the Frost Hill Peony Farm in tiny Belmont, VT where they grow three hundred varieties—singles, doubles, Japanese, hybrids—you name it.

Peonies have been depicted in Chinese art for centuries; the ancient city of Luoyang, in the northwest, is said to produce the most beautiful blooms and, to this day, peony shows and competitions take place there. Although Luoyang was one of the four ancient capital cities of China, Belmont VT is a lot easier to get to. 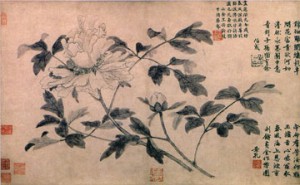 Plants at Frost Hill are on full alert now and it’s a treat to walk among them, admiring the colors and smelling those that are scented. After much mulling, I finally chose a Chinook, because a friend had a dog of that breed. (When he told me the name, I made a smart-ass remark about his acquiring a salmon, not a dog. Not so fast: Chinooks are also sleds dogs bred to deal with Arctic winters. His particular dog loathed the snow which I found a hoot.) 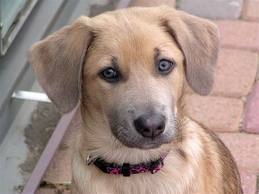 My Chinook (plant, not fish nor dog) is a baby but the folks at Frost Hill assured me that if planted ‘correctly’ it will bloom next year. As with all gardening “correctly” translates to “if the plant is happy.” I’ve promised it I’ll do my best but finding an space in full sun isn’t so easy given the orientation of my garden.  Assuming my Chinook blooms, this is what it will look like: 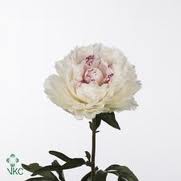 In keeping with the theme, this recipe is for a pseudo-Chinese omelet that, (if you have a vivid imagination), is supposed to remind one of the shape of a peony.

8 ounces fresh bean sprouts, rinsed and drained (I hear the intake of breath here-this isn’t Germany but, if the idea of bean sprouts makes you uneasy, simply move on to a less threatening food.)

Heat a deep skillet over high heat until a drop of water bubbles when sprinkled in. Add oil and turn heat back to medium-high. Pour 1/2 cup of egg mixture into pan. With a spatula, push cooked egg up over shrimp to form a patty.  Saute until golden brown, turning once, about 4 minutes. Set aside and keep warm while you make the rest of the patties with the rest of the egg mixture. If necessary, add a little more oil.

In a saucepan over medium heat, combine chicken broth, soy sauce, 1/4 teaspoon salt and white pepper to taste. Bring to a boil. Mix cornstarch and water; stir into broth mix. Cook and stir until thickened (about 10 seconds). Pour over patties (which have uneven edges like peonies.)

Xiang shou (pronounced ‘ci-ang-show’ and meaning ‘Enjoy.’) If you don’t want to  deal with the recipe, simply enjoy the peonies.

This entry was posted in Uncategorized and tagged Chinese, peony, salmon, Vermont. Bookmark the permalink.