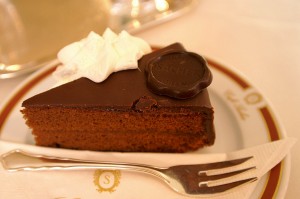 If you want to eat genuine Sachertorte, the dense, chocolate cake with apricot jam between the two layers and a hard, shiny chocolate frosting, you’ll have to go to Vienna, Salzburg or order it online, (because other recipes aren’t considered “authentic.”)  I enjoyed Sachertorte in Vienna at both Hotel Sacher and Hotel Demel. A huge bro-ha-ha over which place had a right to bill its pastry as the “original” went on for years, finally ending in a nod to the Hotel Sacher but frankly, I couldn’t tell much difference. Regardless, it’s a classic, typically served with unsweetened whipped cream. 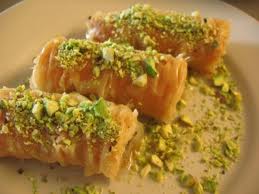 Baklava is another classic dessert with infighting about where it came from. In the U.S., it’s often too sweet but in Turkey and Greece, two of the countries claiming “ownership,” far less so.  Many ethnic groups of the Ottoman Empire and central Asia — Greeks, Turks, Armenians, Lebanese and Iranians, among others–say they originated baklava. The sweet can be served topped with chopped pistachio nuts or a single walnut; eaten on special holidays or at any time; incorporate rose water and/or cardamom; be cut into triangles or squares, etc. The Greeks developed the technique to roll the dough as thin as a leaf; in fact, the word”phyllo” means “leaf” in Greek. In the right setting with a cup of medium sweet Turkish coffee, baklava can be the perfect end to a meal.    (I hear you saying that drinking Turkish coffee is like sipping mud.  Avoid the dregs and it’s delicious.) 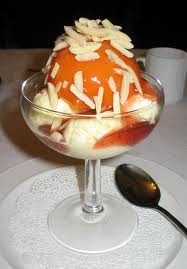 Peach Melba was created about 1862 by French chef August Escoffier at the Hotel Savoy in London to honor Australian soprano Dame Nellie Melba (a lot of the world in one dessert.) Legend has it that Dame Nellie adored ice cream but didn’t eat it often, fearing the cold would harm her delicate vocal cords. Since the dessert also contains peaches and raspberry sauce, it wasn’t considered as vocally dangerous and permitted Dame Nellie to indulge. This photo shows Peach Melba served in a coup, a glass dish with a stem that supposedly keeps the ice cream cold longer.

If you can make raspberry sauce, you can make a fine Peach Melba. Here’s a recipe courtesy of my friend, art writer, Elizabeth Wilson.

In a separate bowl, add 1 T. cornstarch to 2 T. of the raspberry mixture, stirring to combine well. Dump it back into the main mixture and heat over medium until mixture boils and begins to thicken. Cool off heat.  Add lemon juice and stir again.  The sauce keeps for several days.

Mother Myrick’s, a dessert and candy shop in Manchester, VT, uses an old quote as its slogan: Life is Short; Eat Dessert First. Writer and wit Erma Bombeck said something like “Never refuse dessert. Think about those women on the Titanic who waved away the dessert cart.”