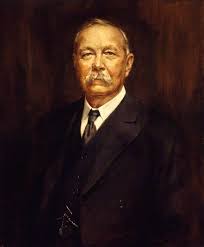 My father was a big Conan Doyle fan and passed his interest along to me -hence my visit to the Sherlock Holmes in 221 Objects show at NYC’s Grolier Club. The Grolier, a largely unheralded gem, never has a many visitors at one time. Founded in 1884 and named after Jean Grolier, a Renaissance collector known for sharing his treasures with friends, it is America’s oldest and largest society for all things book-related.

The Sherlockian cannon is not enormous: fifty-six stories and four novels. All kinds of material relating to the work has been amassed by Glen S. Miranker, a former Apple executive: letters; manuscripts; book illustrations; photos of William Gilette, the late 19th century  actor/stage manager  noted for portraying Holmes onstage and in a 1916 silent film; movie posters and a host of pirated editions of books, i.e., cheaply printed volumes published without the consent of the author. The exhibit’s  title is a nod to Holmes’ 221B address where he presumably 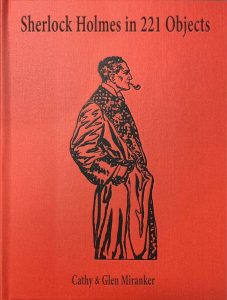 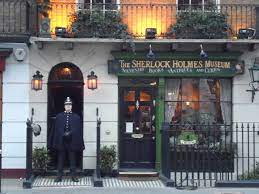 Among the items I especially enjoyed are posters advertising The Hound of the Baskervilles showing the beast with its jaws dripping blood and a handwritten speech by Conan Doyle noting that {killing Holmes}” “was justifiable homicide in self defence. (CD’s spelling).” The demise of Holmes left the public so frantic that Conan Doyle resurrected his hero in 1901 in the Hound story. There is also a 1901 Christmas card sent by William Gillette with an annotation on the back: “Did you ever imagine that Sherlock would be sending his compliments to his maker?” 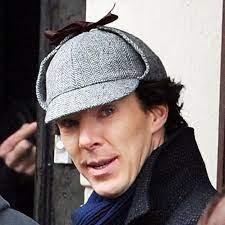 Benedict Cumberbach, the most recent Holmes, in deerstalker

There is no deerstalker per se, although there are many illustrations of Holmes wearing one, nor does the exhibit include a magnifying glass, violin, pipes or any indication of cocaine use, (Homes famously injected a seven and one-half percent solution.) In the late 1880s cocaine was a new drug used as a local anesthetic, nerve tonic and in throat lozenges, gargles, wines, sherries and ports. Conan Doyle,  a trained physician  also used cocaine.  Interestingly, he wrote several articles in favor of vaccination against smallpox and also denounced the views of anti-vaccinators.  The more things change…

If Homes interests you and you are in New York, you might enjoy the exhibit. NB:make an appointment.

In Victorian times recipes could be very elaborate especially in well-off households. Working class folks ate what was cheap and available which meant a lot of onions. If you learn how to caramelize the vegetable you can incorporate it into many dishes. It takes a while to complete but you can putter, sip a glass of wine, read or whatever you prefer during the process. Herewith: 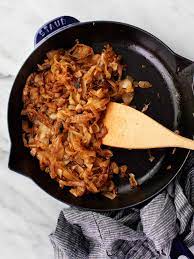 Heat the oil in a 12-inch cast iron skillet over medium heat. Add the onions and sauté for 5 minutes or until starting to soften.

Add the salt, reduce the heat to medium low and cook for 50 to 80 minutes, stirring every few minutes, or until the onions are very soft, golden brown, and caramelized. The timing will depend on the size of your onions and the heat of your stove.

If at any point the onions start to stick to the bottom of the pan, reduce the heat to low. If the onions aren’t deeply brown after 50 minutes and you’d like to speed things up, you can turn the heat higher to get more caramelization. Stir continuously (well, every so often) to prevent burning.

Once done, caramelized onions have lots of uses: pile onto a burger or almost any sandwich, add to scrambled eggs, eat on a piece of toast with goat cheese, top pizza or flatbread, etc.  You can keep them for several days in the fridge or freeze them.

It’s elementary as Holmes would say. What is not elementary is having this published–gremlins at work. If you get it I’d greatly appreciate hearing from you– a quick “got it” would be terrific. Thanks.

One Response to Deerstalker