I love Sake, the fifth cat in my life, but it’s a little like adoring a child in mid-meltdown. She has a tendency to nip when she wants attention and would like me to play with her 24/7. Last November Sake came from the ASPCA aged eleven months, spayed and chipped. She cats my footsteps and gets an A in litter pan tidiness but some memo didn’t reach her because she doesn’t purr but wags her tail when happy. 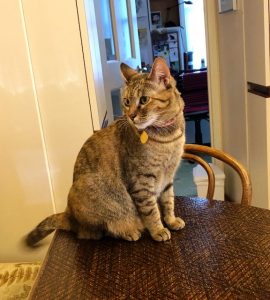 Cat one, Tinkerbelle, arrived when my younger daughter was almost two. Some months back we’d had to put down our very old dog and my then-husband confessed he was sick of dog walking. I’d never had, (this was before we acted like animals were children and owned, rather than adopted them), a cat before but fell into a woman with two kittens who was willing to part with one because we “lived on Park Avenue.” (Not exactly—we were the last building before the train went into the tunnel at 96th Street.). She arrived with a carrier; I reached in and one kitten attached itself to me.  After spending two days under a bed, Tinker, a handsome marmalade female, emerged to become a great family member. She was willing to be dressed in doll clothes  and wheeled in the toy stroller and had a habit of leaping up to turn on the light in the room outside the kitchen. During her last weeks my second husband cooked her chicken livers and gave her water from a wine glass in the kitchen sink so she wouldn’t have to lean down. 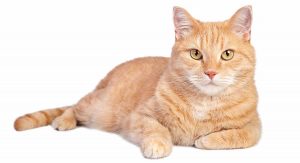 A while after Tinker’s death we wanted a kitten for my younger daughter’s thirteenth birthday. It was a freezing cold February when there wasn’t a kitten to be had until my older daughter located one at a vet’s.  We took an astronomically expensive cab ride to view her finding but only after we said ‘yes’ did the vet announce we would need to leave her with him another four days, engendering another long, costly cab ride. Sushi was a lap sitter and the life of every party, accepting pats or being picked up by anyone. When she was nineteen we had to put her down  saddening me and devastating my husband.

It took him eleven months to come round to considering a new cat. On the way to the animal shelter in Vermont I casually said, “Maybe if we took two kittens you would feel less guilty.” Bingo. Within an hour we had told the shelter we didn’t work and would therefore be with our kittens all the time, (a boldfaced lie as we both had demanding, full-time jobs), and were given custody of Pogo, tiger with a ringed-tail that reminded me of Walt Kelly’s Pogo) and her littermate, Fuji, a gray and pinkish tortoiseshell. Other than fruit these girls ate absolutely everything (salad, pasta, vegetable soup) so it was hell to make yourself a sandwich and a no-no to leave any food unattended. I once entered the Vermont kitchen just in time to see Fuji raise the lid of the metal breadbox while Pogo deftly removed a package of pita. Pogo was incredibly smart and athletic, given to walking on the beam high above the dining table while guests looked up, (some horrified she would fall into their plate). Fuji loved tossing around a toy stuffed octopus while Pogo watched, the bubble over her head reading “how juvenile.” 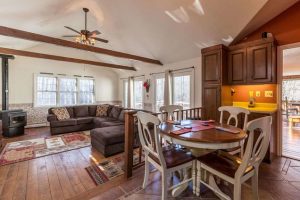 Dorset dining room but reimagined by owners after us.

A year ago, missing animal companionship, I adopted Sake. She loves it when I get out my watercolors hoping to play with the gum eraser and tubes of paint. As I write, she is sitting in front of me hoping I’ll give in and fetch one of her toys. I’m not crazy but obviously I quality as a cat lady.

And now a recipe for –no, not cat food nor curried leopard—but: 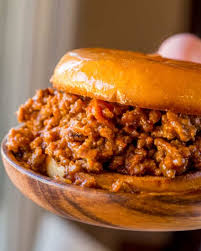 Sloppy Joe’s (made with Catsup)

In a medium-sized frying pan, brown meat until completely cooked. Salt and pepper the meat while browning it.

Add ketchup, brown sugar and mustard. Mix thoroughly and continue cooking until heated through. Taste and add a little more catsup, if needed.

Your choice as to booze, beer, soft drink etc. Toast Biden and wish him well. Then meow.

This entry was posted in Uncategorized and tagged cats, catsup, Vermont, watercolors. Bookmark the permalink.