Armed with a filled-in absentee ballot I went to vote at the Robert F. Wagner Middle School on East 75th Street. Me and lots of other people. I arrived at 10:15 when the double lines stretched around the block as other voters kept coming. At first the weather was misty; then it turned to sprinkles and at about 11:45 became real rain, time to launch the umbrella. 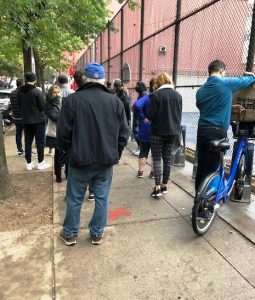 double lines around the block

The culinary highlight of the day happened at roughly 11:15 when several young women appeared with pizza boxes, offering slices to everyone on line. “Pizza at the Polls,” said my server, cheerily. I took a slice (pepperoni) and was glad I did; as the woman in front of me said, “this is perfect; carbs and fat, just what we need to keep going.” The woman with the box told me that the effort was funded by “a woman who saw it on Instagram and replicated it. “

Finally, three and a half hours later, I was inside the school to vote. Again, the workers were magnificent. We were handed hand wipes and directed to a waiting spot distanced from others. Two minutes later I reached the computer station where my name was recorded and I signed with a stylus that I was told to keep as a push would turn it into a pen for marking my ballot.  Ballot in hand I moved to the area to fill it in and then to the scanning area. This whole operation took under seven minutes until I was out the door with my I Voted!

Every poll watcher, line organizer and other personnel encountered was helpful and knew exactly what to do, something of an election first. 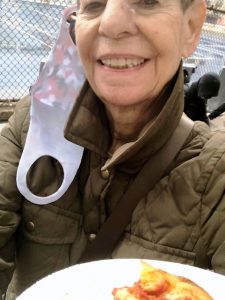 Fuel for the rest of the wait 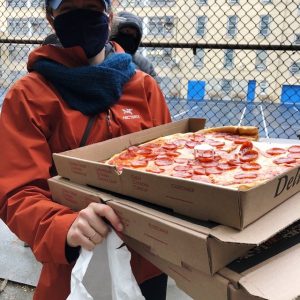 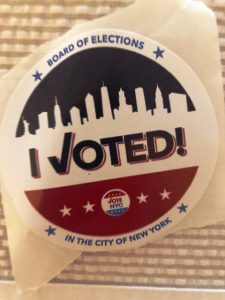 Bravo, poll workers, pizza deliverers and funder and cheers to all of us who stood in line quietly until we reached our destination. It was a proud—if damp—experience and entirely worth the effort. 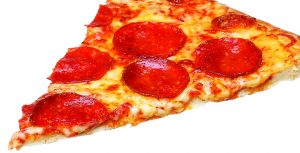 I hope you don’t expect a pizza recipe. In the past when I had the Vermont house and outdoor grill I made pizza using dough bought from the supermarket, but for now that’s over. We’re mid-pandemic and no one is cooking for anyone unless it’s yourself or your family. If you have a yen for pizza select the pizza place of your choice that serves your personal fave: Margarita, thin crust, Sicilian, gluten-free, white, or something else. Order a personal slice or whole pie for the family and eat it on the spot or take it home. To drink? Water from your water bottle.  If you have yet to vote, do so.

This entry was posted in Uncategorized and tagged pizza, Vermont, vote. Bookmark the permalink.