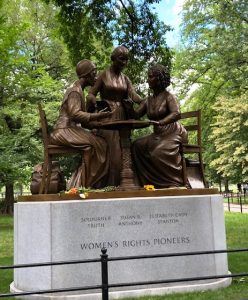 Over the weekend a friend and I went to the new Monumental Women sculpture in Central Park. The women shown are 19th century women’s rights activists, Elizabeth Cady Stanton and Susan B. Anthony (both New Yorkers) and Sojourner Truth, born into slavery in Ulster County, New York in 1797 although she lived in and around NYC.

As an idea the work gets a 10+; as a work of art, a far lower number as it’s blocky, awkward and not emotionally engaging.  An interview (on Zoom, where else?) with the sculptor, Meredith Bergmann, gave me the impression that she had been curtailed in various ways by the MW committee, not a surprise as almost anything developed by committee gets tweaked. Perhaps when the sculpture becomes patinated it will be more pleasing; for now it’s not particularly beautiful although a work showing women made by a woman in the Park is great and long overdue. 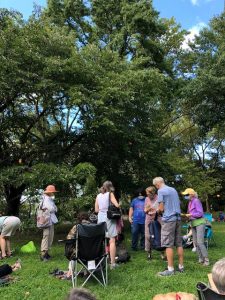 Later the same day there was a postcard writing group that gathered in Riverside Park to which I toted my lightweight folding chair, cards, stamps, water, etc. My cards will be mailed tomorrow to voters of color in Texas. All I can do is pray they have the desired effect; meanwhile, I go on writing cards and phone banking. Four more years of the horror currently in effect is beyond me. 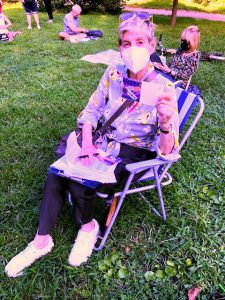 On the plus side, I’m visiting family over Labor Day weekend taking a train to Providence as that’s closer to their home in western MA than Boston. They—my younger stepson and his family– will be the first glimpse of family I have had since the pandemic began. All the Zoom and FaceTime in the world doesn’t come close to being with actual people.  Also this week,  when the stitches from my Mohs nose surgery and plastic repair come out I’ll have another cause for celebration.

When it comes to monumental women, Eleanor Roosevelt is right up there.  By all accounts she served ghastly food even at the White House where she offered dinners like deviled eggs with tomato sauce, mashed potatoes, wheat bread and coffee, one of her “seven and a half cent” menus. Other non-winners were sweetbreads, gelatin salads, spaghetti with boiled carrots and the so-called “Cheapest Soup” made of flour, lard, a bunch each of spinach, mustard greens, green cabbage, beet tops, watercress, radishes, chopped onion, parsley, thyme, bay leaf, green onion top, salt, pepper, red pepper pod or drop of Tabasco with a “bacon strip” or non-meaty hambone to lend the illusion of actual food. Yuck.

One of the few dishes Mrs. Roosevelt is said to have cooked decently was scrambled eggs. The secrets of success (which she probably ignored) are having the pan hot but not too hot and adding a splash of cool water to ‘loosen them up.’ Other sources recommend adding one or two tablespoons of sour cream or crème fraiche. 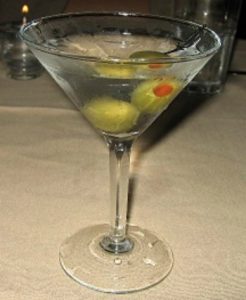 This entry was posted in Uncategorized and tagged Central Park, eggs, Martini, women. Bookmark the permalink.