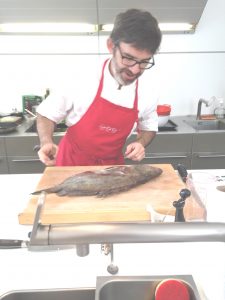 Unlike Julia, this one is actually French, male and does his thing in Cancale, Brittany.  Jacques Antoine, a chef/sommelier at La Cuisine Corsaire, speaks excellent English, a good thing as his menu was fairly intricate. My foodie group had a great time watching his demo of Saint-Pierre Retour des Indes, basically, John Dory (the fish) with seasoning reminiscent of India, a recipe created in the 80s by master chef and spice dealer, Olivier Roellinger, the fish accompanied by a green apple and mango puree and a toss of green cabbage.  We sat next to the area where Jacques worked, marveling at the stove top, a flat induction surface that someone described as “cooking as playing air hockey”  as the top enables the chef to slide pans around. Jacques claims the surface—to date a strictly pro appliance–allows for greater control. I was also awe-struck by his filleting skills.

After Jacques cooked, he served the end result for a delicious lunch accompanied by an appropriate wine, (of course, it’s France.) 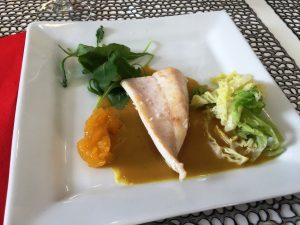 Lunch after the demo

A demo/lesson at the cooking school costs about $80 pp which may depend on the size of the group. Here is the link to the school (in French only): http://www.cuisine-corsaire.fr/

After lunch, we staggered across the street to Grain de Vanille, a patisserie, for dessert. I had a Florentine, while others opted for the Kouign-amann which was better in terms of more caramel at other patisseries sampled during the trip. Cancale, known for its oysters, is attractive: little streets and alleys; antique shops, some good, some filled with standard-issue thrift; a movie theater.  Behind the Roellinger spice shop, where every seed and powder is laid out as though on display in a high-end jewelry store, there’s a lovely little garden where I sat for a while for relief from the hot sun.

The day ended with a late afternoon sail in the Bay of Cancale. Jerome, the too-cool-for-school guy who sailed the boat also managed the food and drink while pointing out key islands. He handed out plastic glasses on ropes that go around the neck, and served a delicious, lethal cocktail of simple syrup flavored with vanilla, rum and cider.  To go with this, he set out containers of both duck and mackerel rillettes, bread, tiny shrimp, (you’re supposed to shell them but the crunch is delightful so I didn’t), and roasted pumpkin seeds.  The finale was oysters straight from the source, very salty and delicious with the bonus of throwing the shells overboard.  The oysters kept coming until we could eat no more. 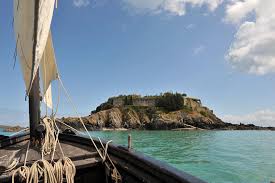 Under sail in the bay

While we ate, sailed and watched the sunset, Mt. Saint Michel floated in the distance; up close was Poilane Island, a former fortress turned into a second home by the eponymous Parisian bread baking family whose son was killed in a helicopter crash. After the tragedy, the house was sold to someone who has revamped it in a sort of Japanese style. Huge and accessible only by boat, it’s probably wonderful but a little challenging to get to.

Apparently Brexit has had an anticipatory effect on British fishing for scallops in this bay which technically belongs to France. Some nasty encounters have taken place. Mon Dieu!

Personally, what I do with oysters is eat them. However, should you wish to, um, stir the pot, you could make Oyster Stew 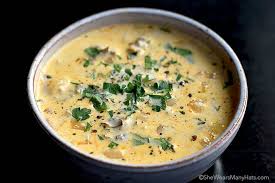 Stir butter and garlic in stockpot over medium heat until butter begins to brown. Remove garlic and discard.

Stir shallots into browned butter. Cook and stir until translucent, 5 to 7 minutes.

Pour sherry over shallots in the stockpot and bring to a boil while scraping any browned bits off of the bottom of the pot. Simmer until liquid is reduced by half, 3 to 5 minutes.

Pour reserved oyster liquor, milk, and cream into the stockpot; bring mixture to a simmer. Reduce heat to medium-low and stir in oysters; cook until oyster edges begin to ruffle, about 3 minutes. Remove from heat.

Stir in parsley; season with sea salt to taste. Ladle into bowls and garnish with sweet paprika and oyster crackers.