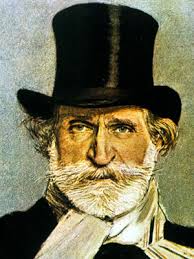 Giuseppe Verdi 1813-1901, composer of Rigoletto, Aida, Macbeth and many other operas

My behind the scenes visit to The Met was led by Robert. P., a knowledgeable friend who knows his stuff cold and imparts info to opera buffs and limited-English speakers who never heard of Tosca with equal friendliness.

The Met, founded in 1880 originally on 39th and Broadway, was an alternative to the previously established Academy of Music. In 1996 it moved to Lincoln Center.

Once through public areas, we were in the “animal entrance” area with black-and-yellow striped doors. Met animal actors audition; horses when tapped, return to their stable where the doors are painted to mimic the Met stripes, encouraging familiarity.  Dogs, donkeys and others beasts also play the Met. Once, when Renée Fleming was on stage in Manon, a canine accompanying a super in the chorus was also present. As the diva launched into an aria, the dog, which up to then had behaved impeccably, lifted its muzzle 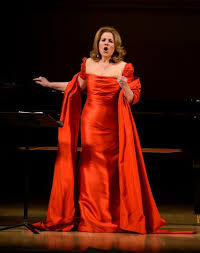 and sang along. When the curtain came down, Fleming turned to the conductor and said, “Either the dog goes or I do.” Apparently, (and possibly apocryphally), there was some thought to keeping the dog but the diva prevailed.

In an elevator I chatted up a woman seen later in the props area touching up an item for the next day’s HD filming.  Perfection rules:  a large cart laden with paint is always ready in the wings; during intermissions anything dinged is touched up.  We peeked into one of the windowless downstairs rooms where singers and a director were rehearsing; later, General Manager Peter Gelb walked past. The Met employs 1600 people per opera and typically runs two shows daily; a daytime rehearsal of one opera and evening performance of another. The ninety-minute tour is a great look at some of the backstage efforts that contribute to this magnificent house’s greatness.

Visiting Milan’s La Scala, built in 1776–78 by Empress Maria Theresa of Austria, (whose country then ruled Milan), is rather different as most of the time is spent in the adjacent museum. My travel companion and I had bought tickets online ahead; as it turned out we could have purchased on the spot as Milan in mid-March was chilly, rainy and not crammed with tourists. The self-guided visit took us past costumes, posters, displays of set designs, old musical instruments and paintings of musicians and singers of yore—many with almost unreadable labels and dust.  Much attention is paid to the diva of divas, Maria Callas, who is seen on video in both her before –and- after looks, (in the after she’s incredibly slender and looks a tad like Audrey Hepburn whom we were told she wanted to emulate.) Before the museum, we entered a theater box to see the stage where carpenters and painters were reading a set. 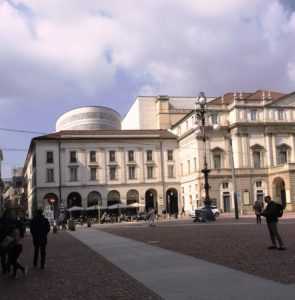 Opera houses are traditionally red and gold—both the Met and La Scala follow this formula and both are elliptical in design to capture and enhance sound. The Met’s capacity is 3800; La Scala, (actually Teatro alla Scala, the theater at the stairs from the name of a church that previously occupied the location), holds just over 2000 and underwent a major renovation from 2002 to 2004 adding two modern, controversial towers.

This is a vastly truncated version of the dish’s history:

Dame Melba, the singer after whom the dish is named, was born Helen Porter Mitchell in a suburb of Melbourne, Australia. Known as Nellie, she sang all over Europe and moved in very chic circles –an Edwardian star who took the last name Melba in honor of her 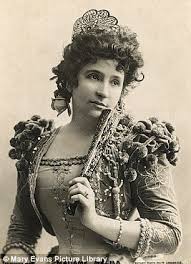 hometown. In London while performing at Covent Garden, she met celeb chef Escoffier who created the dish in her honor. The original version was served in a swan-shaped dish to echo the swan boat the chef had seen in Lohengren starting Melba and was dubbed Pecheau Cygne (peach with a swan). A few years later, when Escoffier and Cesar Ritz opened the Ritz Carlton in London, the chef added raspberry puree and renamed the dessert: 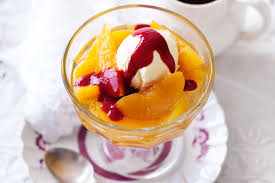 Frankly I think this is fiddly but what would you expect from even Escoffier’s cousin? For the non-diva chefs, just cut very ripe peaches in half; make a raspberry sauce and assemble.

1 (1-inch) piece vanilla bean (this assumes you’ll poach them. You could just wash and split)

Serve with the opera of your choice in the background.

This entry was posted in Uncategorized and tagged Milan, New York, opera, peaches. Bookmark the permalink.