Dancing on Top of the World 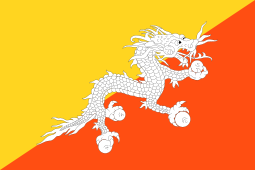 My Bhutan itinerary didn’t include any dance viewing which I casually mentioned to our group leader.

Eureka! Towards the end of the trip he announced that there was a festival at the Dochula Pass where we would be en route back to Paro, site of the country’s only major airport. Time in Bhutan is “elastic” in that events don’t necessarily happen at the stated time—or even at all. Our leader said we’d go to the Pass and, if the festival was happening at the anticipated time, we’d be in luck. 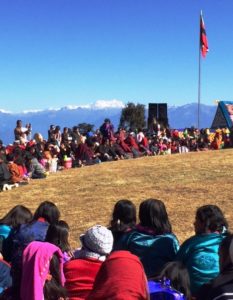 Festival at Dochula with Himalayas in background

We did and it was. The weather was glorious—blue sky, no wind, and by eleven A.M.  about sixty-five degrees.  The Queen Mother, the festival’s patron, was there with a cadre of security guards whose job appeared to be insuring that she wasn’t crowded. She seemed to enjoy mingling with the general public, moving through the large audience, shaking hands, murmuring “nice to meet you” and smiling. Two or three members of our group “met” her. I was more interested in the festival so moved aside, trying to get the best view of the dancing.

At one point I was in full view of “backstage” where the dancers were changing costume. In my quest to see the dancing from the front, I fetched up next to a CNN TV crew filming background for an episode of 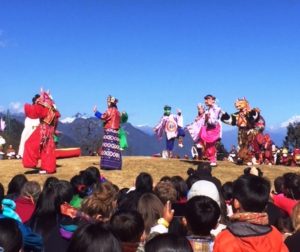 Anthony Bourdain’s Part’s Unknown to air this spring. (If anyone spots the episode, I’d love a heads-up.) The cameraman and I know people in common and one of the assistants handed me a mo-mo (dumpling with a rice flour exterior and something veggie/shrimpy inside.) See link to NY Times article about new mo mo spot in Jackson Heights, Queens: www.nytimes.com/?action=click&contentCollection=Food&region=TopBar&module=HomePage-Button&pgtype=article

The performance included men in red suits with jester-like hats from which protruded large, pink penises—in Bhutan, phallic symbols are traced to Drukpa Kunley, aka the 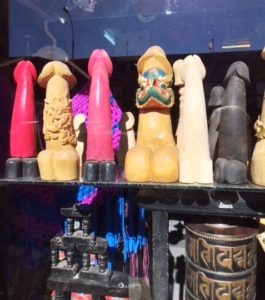 “Divine Madman”  and are supposed to drive away the evil eye. The whole phallic worship bit is both frowned on by modern Bhutanese and enjoyed as it appeals to tourists.  Here is a link to article about it from the New York Times (no, not my only source of the printed word): https://www.nytimes.com/2017/08/24/world/asia/bhutan-phallus-commercialization-tourism.html?_r=0

Just in case you think I’m crazy enough to offer a recipe for mo-mos, think again. This is for chicken soup, something I made recently for the first time. 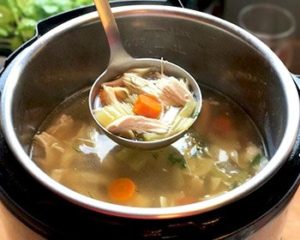 To finish the soup:

Finely chopped herbs, such as parsley, scallions, dill or a combination.   Um, yes, if you have them handy.

Bring to a boil over high heat, then immediately reduce the heat to very low. Adjust heat until the soup is “smiling.” i.e., barely moving on the surface, with an occasional bubble.  Cook uncovered, until the chicken is very tender and falling off the bone, 1 to 1 1/2 hours.

When cool enough to handle, use tongs to transfer chicken from the pot to a container. Taste the broth and continue to simmer it until it is concentrated and tasty. Strain broth through a fine sieve (or a colander lined with cheesecloth –yes) into a separate container. Discard all the solids from the strainer (or reserve the vegetables, chill and serve with vinaigrette. (I did and they were blah at best).

Refrigerate chicken pieces and broth separately until a layer of yellow fat rises rises to the top of the broth.

When ready to finish the soup, use fingers to separate chicken meat from bones and skin; keep meat only. (Note: Julia feels you use only the white meat. I used both.)

Skim chicken fat from top of broth and set aside. Put 3 tablespoons of the fat in a soup pot with a lid.

Add leeks, stir to coat, and heat over medium heat until leeks begin to fry. Then reduce the heat to a gentle sizzle and cook, stirring often, until slightly softened, about 3 minutes. (I omitted the leeks entirely but they would have been nice.)

Add carrots, sprinkle with salt, stir, and cover the pot. Cook until vegetables are just tender, about 5 minutes more. (Keep in mind that vegetables will continue to cook in the soup.) Do not brown.

Pour broth into pot with vegetables and heat to a simmer. Add noodles/ your choice of starch and simmer until heated through, soft and plumped. Add chicken, then taste broth and add salt and pepper to taste. For best flavor, soup should have some golden droplets of fat on top.

Note: this looks incredibly complicated. If you go whole hog, it is, kinda. However, adding “fresh” carrots and onions after soup is done is smart as the already-cooked veggies have had all flavor drained out of them.

This makes a lovely meal. You could serve with bread and cheese and call it lunch or dinner.  Or, you could serve to a sick family member or friend and call yourself Mother Teresa.

This entry was posted in Uncategorized and tagged Bhutan, chicken, dance. Bookmark the permalink.