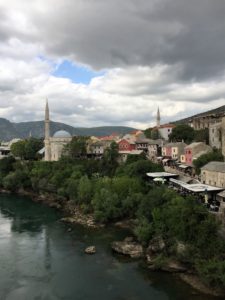 Crossing the border between Croatia and Bosnia-Herzegovina, (the crossing a non-event), is like going from the dazzle of Tiffany’s into a dark dumpster.  The countryside gets less lovely.  Once in Mostar, the difference between countries is marked by greater poverty (there are kids begging on the famous Stari Most Bridge) 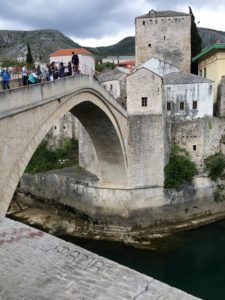 and many signs of the 1990s war including buildings with highly visible holes from mortar shells.   Apparently there is a coffee culture and various local foods but the lunch we had (sausages and chopped meat, presumably beef,  shaped like a cigar) was greasy and heavy although the grilled sort- of- pita bread that came with it was marvelous.

The interior of the rebuilt 1618 Koski Mehmed Paša Mosque is crude although the fountain outside and the setting right on the river’s edge is lovely. Back in the day the gardens must have been delightful.  For me, the highlight was visiting the Turkish House (Kajtaz’s House) in the Muslim quarter where a bell summons the woman next door who is wildly enthusiastic about the property and has a personal connection which I didn’t fully grasp.

The house was built in the late 16th century and belonged to the Turkish Governor who lived there with his four wives. Outside is a high wall, both to keep out the intense summer sun and to ensure that men couldn’t see in. Color is everywhere—on kilim rungs, pillows, table cloths and hangings –along with examples of clothing of the period.

Our guide relayed several charming anecdotes including one about the husband leaving a rose outside wife #1’s door—only if she accepted it was he permitted to enter her room while the other wives accepted the signal to mind the kids.  The small, low dining table encourages family closeness (small is an understatement); sitting around it with crossed legs beneath you encourages moderate eating as one feels replete early on –Weight Watchers take note.

The famous bridge was blown up in 1993 and rebuilt using mostly the original limestone dredged from the river.  In warm weather young men dive off the bridge into the cold water beneath—it’s dangerous and must be frightening to even watch. The river’s edge is lined with restaurants and cafes making it a nice spot for a meal or drink. The lead up to the bridge is lined with shops selling cheap scarves, carvings and every imaginable souvenir, sort of a gauntlet you have to run to get to the bridge itself, now a UNESCO site.

There are other parts of BH that attract visitors and it’s unfair of me to judge the country on a one-day, one-city visit. However, I’d say don’t rush to this part of the world for Mostar alone but, if you’re in the area and can spare the time, a visit here is a great way to see another culture.

Having already dissed the food, this is a fallback to hummus, served here as an appetizer. Trust me, homemade hummus is a different beast than the stuff in the plastic container at the store. 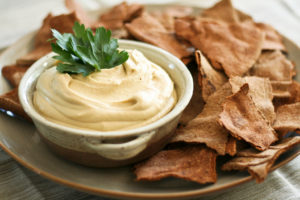 Get out the trusty food processor and put the lemon juice and tahini in; blend. Add the other ingredients, ½ the chickpeas at a time. Scrape down bowl sides a few times to be sure everything is smoothly incorporated. And voila. Serve with pita chips (whole wheat pita cut into triangles and toasted.) Find BH on the map. Yes, there next to Croatia.

This entry was posted in Uncategorized and tagged hummus, mosque, sausage, Turkish. Bookmark the permalink.

One Response to Briefly in Bosnia