Q and other New York Stories 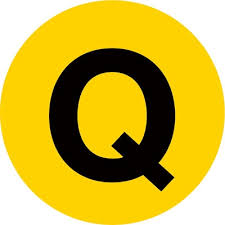 For those non-New Yorkers, the Q is the just-opened Second Avenue subway. Construction of same has been going on seemingly forever, wrecking businesses along the avenue, adding to traffic congestion in the area and generally driving everyone mad.

The three-stop  new line opened New Year’s Day; as I was going to a party ‘up the line’ I took it. Talk about small worlds: I got off at my stop and ran into people I know. While we chatted we took the very long escalator to the top and ‘ran into’ my (non-New Yorker) older daughter and her significant other coming down the opposite escalator. The Q is what the rest of our ancient subway should look like–clean, shiny, laden with interesting art and pretty nice all around. Sadly, two days later when I took the Q again, soil was beginning to build up although it has a long way to go to match the rest!

The second Q trip took me to the Museum of Art and Design, a truly great venue that doesn’t get enough visitors. I’d planned to go to the  current show’s opening reception but got stuck in traffic so this was my exposure to the current exhibition devoted to the work of five artists. 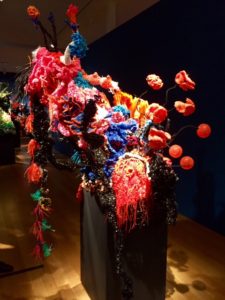 A work from Crochet Coral Seas

Crochet Coral Seas: Toxic Reef is made up of crocheted yarn combined with plastic trash from the ocean to point up the stress living reefs undergo due to global warming. The exhibit, the work of sisters Margaret and Christine Wertheim as well as other crafters, is gorgeous, colorful and uplifting as well as upsetting when you think of all the junk in our waters. Another work on view is Forbidden Fruit by Chris Antemann who works in Meissen porcelain–I don’t usually think of porcelain as sexy and 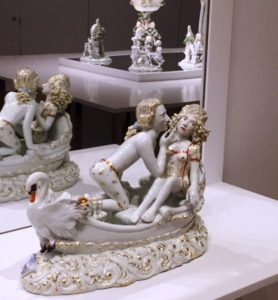 Not your average porcelain teacup

lascivious but here it is. Both shows close pretty soon so get to MAD if they interest you. While there, drop into what is absolutely the most wonderful museum gift shop in the city– while very little could be characterized as inexpensive, everything is stunning.

On Saturday, during our biggest snowfall  this winter so far, there was a sign- making workshop for the upcoming Women’s March Saturday, January 21 from 11-4. It’s going to be a zoo but it’s a once in a lifetime (let’s hope) thing. There will be similar marches in DC, others US cities and many in other parts of the world; this is the link if you want to sign up and take part:

Not your average porcelain teacup

Were you marching and afterwards could make your way back to my home, I might serve you: 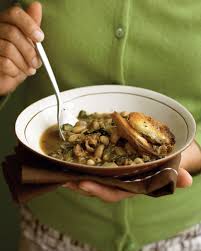 WHITE BEAN SOUP WITH SAUSAGE AND COLLARDS (this amount feeds 6; just double for 12)

Cook sausage and onion in a large pan over medium heat until sausage is all cooked through to brown and crumbled into bits.  Try not to let bottom of pan burn.

Add collard greens or spinach, beans and 4 cups water, season with salt and pepper. (About 1 Tbls. salt –add, taste and add more depending). Bring to a boil, then reduce heat and simmer until soup thickens a little, about 8 minutes. Stir in the red wine vinegar.

Serve with crusty bread and a salad. Drink to getting through the next four years.

5 Responses to Q and other New York Stories