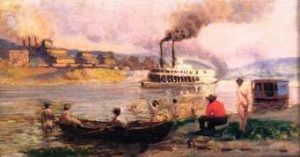 No, not Elizabeth even though she’s celebrating her 90th, but Cincinnati, dubbed the Queen City during its mid-19th century boom and sometimes called that today. The city is on the Ohio River right across from Kentucky. To reach my hostess’ house, we crossed the river via the historic Anderson Ferry making me long for the departed days of big river steamboats. Probably read Showboat too many times as a teen.

Loved the annual flower show on the riverside with many tributes to sister cities (never realized one city could have so many sibs). The African tribute was a gorgeous red-and- 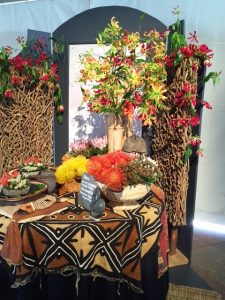 yellow with great fabrics while one bridal shower tabletop made me yearn to have or throw a party.

The Contemporary Art Museum, one of the first museums designed by the late, great Zaha Hadid, didn’t get to me but perhaps that’s because it’s crammed into downtown. I did like the exhibit by Korean-American Do Hoh Suh,  full of  life-size, mundane items like a toilet and microwave all crafted from bright colored mesh. 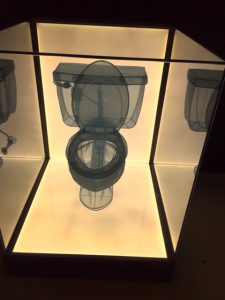 The Westcott House by Frank Lloyd Wright is in Springfield, about an hour and a half from Cincinnati. The Prairie style home was built for locals Burton and Orpha Westcott in 1908. Like all Wright structures I’ve seen, it’s spare, elegant and uncomfortable-looking although the reflecting pond in front softens it a tad.  Per Barb, our terrific docent, we learned that progressive-minded Orpha insisted that the children’s playroom be on the ground floor (usually the kids were tucked away upstairs) and Wright gave in.  One of the Wright-designed lightbulb fixtures is original; the rest were re-created for a perfect match. 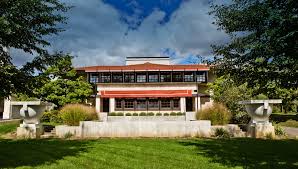 We went to a very fine production of David Mamet’s Glen Garry Glen Ross at The Warsaw Federal Incline Theater, a very complicated name for a new, good looking playhouse. The Incline District gets its name because–you guessed it– it’s situated on a hillside. If the area gets enough momentum, apparently not yet a sure thing, it will be a nice neighborhood with housing, restaurants and entertainment venues.

Although I’m not in the gluten-free camp, my hostess is. Herewith her recipe for muffins that meet that requirement and actually taste good. Give it a shot. 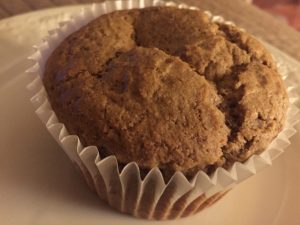 Fill each about 3/4 full

Bake 20 minutes or until golden brown and muffins spring back to touch.

Cuppa joe goes well with these.

This entry was posted in Uncategorized and tagged muffin, Ohio, Wright. Bookmark the permalink.