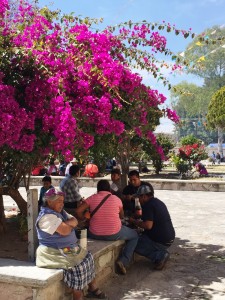 For a fairly small city, (just over 3.8 million) Oaxaca has a extraordinarily large number of museums. The Textile Museum is housed in an unimposing former colonial building; the interiors, (plural because there are several completely separate areas), are glorious with spare, beautifully thought-through exhibits. 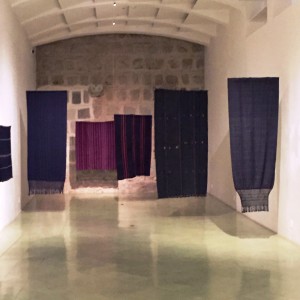 crimson. Another area displayed wonderful photos of the dye -making process; in yet another gallery we admired a display of pen and ink work (and loved the space that is rentable for a gala party. Wish I could have one here!) A creative kids’ playground outdoors is set in front of a white wall with espaliered cactus plants; the path alongside has moss growing between herringboned bricks. Nearby is a cute coffee shop and what appeared to be a fancy restaurant (with no diners at the time we passed.) The gift shop is fabulous and I regret not buying a pillow case I saw but you know the one about hindsight.

A few days later we went to the tiny Museo Belber- Jimenez (hilarious to locate using our map because buildings tend to be “near” but not right at the designated spot–we left behind a lot of head scratchers probably due to my garbled Spanish.) Belber-Jimenez showcases the collection of Federico Jiménez, a jewelry maker originally from the village of Tutulepec, and his wife, Ellen Belber; it includes archeological and colonial jewelry, some fabulous decorated saddles and manikins dressed in gorgeous folk dresses. 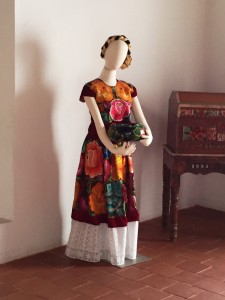 There is also a small library where (depending on how good your Spanish is) you can do some basic research. Of course, there’s a gift shop.

The Museum of Contemporary Art, Oaxaca’s MOMA, is in the so-called House of Cortez (where Cortez never lived.) Upstairs was a display of carved pillars and objects in several rooms near galleries with wall drawings and a film explaining their origin as a codex (very old book) originally in the Vatican. This museum is light, airy and free. All these museums are in the central part of the city; walking around to reach them is part of the huge pleasure of being in the city. Stopping for a coffee en route is part of the deal.
Now to a real and supposedly easy mole. The daughter in law of the woman who runs the B&B we stayed at teaches cooking. This is her recipe: 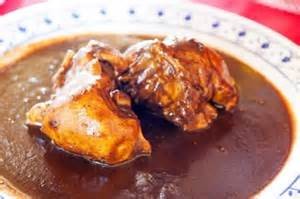 Roast the chilies one by one over a gas flame using tongs.. Remove seeds and ribs and set aside (this is to make the end result not mind-blowingly hot.) Put chilies in 2 cups of water and simmer about 15 minutes until soft. Drain, saving the water.
In a pan at about 300, roast the tomatoes, onion and garlic cloves Strain the chilies and put in food blender with tomatoes, cloves, allspice and oregano. Put this mix into a pan with oil and cook for 20 minutes over a low heat. Add 1 cup of chicken broth and fruits. After 10 minutes season with salt and add the chicken pieces. Simmer for another 10 minutes. Serve.

This entry was posted in Uncategorized and tagged chili, jewelry, museum, Oaxaca. Bookmark the permalink.

One Response to Myriad Museums