The only locally-produced items I found in Berlin were wurst (more later) and marzipan. That said, the city has wonderful museums, a lively art scene, great music in numerous venues and KaDaWe, (‘Ka-da-vay’); Europe’s biggest department store with a food hall that rivals Harrod’s in London. And a lot of very interesting history. 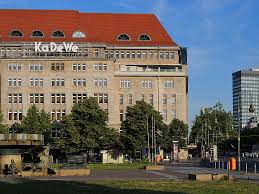 There is a lot of “apologizing” for the Holocaust in various museums and exhibitions. Far more moving to me are are the stolperstein (in German this means ‘stumbling blocks”) created by artist Gunter Demning to commemorate individual Holocaust victims. Each Stolperstone is a small concrete cube covered in brass with information about the dead person including name, birth date and what happened if this is known. 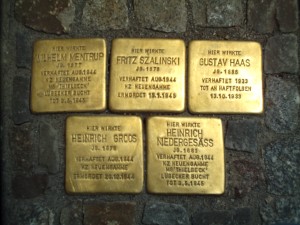 Stolpersteine outside a building

Perhaps it is apocryphal, perhaps not, but it’s said that, prior to the Holocaust, when a non-Jew stumbled over a stone, he  said “there must be a Jew buried here”–hence the name.

Many apartment buildings undertake research to learn about their former inhabitants and then invite residents to contribute to the stolperstine, order the tributes and see that the installation is carried out properly. It’s not unusual to see a building with five or more blocks, usually placed in front so they are noticeable but not where they will impede foot traffic.

These little remembrances are a lot more personal than the more formal stelae at the Memorial to the Murdered Jews of Europe (click here to read a fairly scathing New Yorker article criticizing this museum) and the Jewish Museum Berlin, much of which was designed by Daniel Liebeskind.

Not to become frivolous when writing about such a profound subject but I did start with wurst and will end on that note. 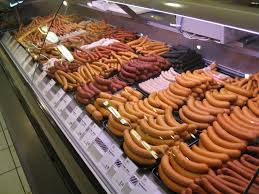 Never mind the plethora of fabulous German sausages–blood sausage, bratwurst, weisswurst and others. The only sausage I ate was currywurst, a fast food dish of steamed, then fried pork sausage, usually cut into pieces and topped with a ketchup-like sauce seasoned with curry powder. The whole thing is usually served with French fries. I will spare you a recipe because it’s not likely you’d want to reproduce this but it wasn’t as bad as it sounds.

Instead, this recipe is for the ubiquitous German potato salad, here made with yogurt which I ate a few times with great pleasure. 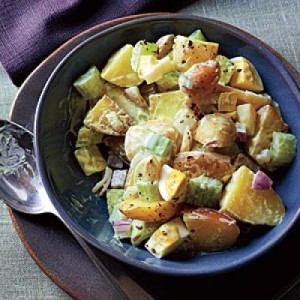 I serve this at room temperature. Just be careful not to leave it out for too long in a very warm room. Raise your beer stein–it’s still October.

This entry was posted in Uncategorized and tagged Berlin, German, Holocaust, potato, wurst. Bookmark the permalink.