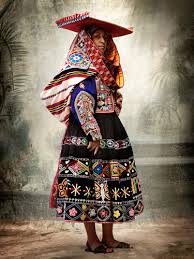 The Queen Sophia Spanish Institute, practically around the corner from where I live, is one of those little known but fabulous New York City institutions. The Institute offers all manner of programs to promote Spanish culture with special emphasis on fine arts. The current program, Alta Moda, displays work by photographer Mario Testino, apparently a boldface name to those who follow haute couture, photography or Peru. Alto Moda means “high fashion” in Spanish; the exhibit consists of huge photos of men and women wearing clothes particular to Cuzco, Peru. Every garment shown is intricate, colorful and very complicated; it must take quite a while to don any one of them. The downstairs gallery features outfits that “ordinary” people might wear for festivals while the upstairs space is largely pictures of people in elaborate theatrical costumes. All the clothes are spectacular (and, judging from the lack of wear, spanking new) but the downstairs group is easier to relate to as the models aren’t in costume complete with masks, outlandish, stylized noses, horns or bizarre wigs.

Years ago, a woman friend and I went to Cuzco. I recall little beyond drinking lots of Pisco Sours 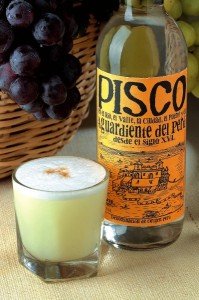 which led both of us to buy bottles of Pisco to bring home to our husbands. One stateside sip of the cocktails and we both realized Pisco was a taste that didn’t travel well– my bottle sat around for years until I deep-sixed it. Happily, memories of  Manchu Pichu (when the “hotel” housed a mere twelve guests per night and only had running water now and again) have staye 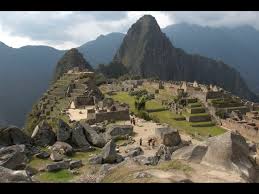 My strongest Peruvian food recollection is of sampling guinea pig at a market in the Urubamba Valley. I concentrated on the taste (chicken-esque) and not on the pet gp we looked after when our neighbors went on vacation. Don’t think I could eat guinea pig today but back then my food -consciousness hadn’t yet been raised.

Potatoes are a staple of Peruvian food (in fairness, it can’t quite be labeled a cuisine). This recipe includes chorizo, a Spanish item but so much of Peruvian history and culture is Spanish-related (though not very positive from the Peruvian POV) I thought it was worth including. 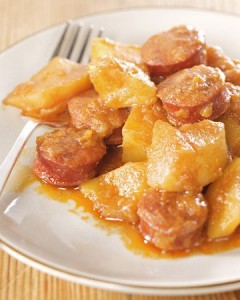 1 teaspoon pimenton (Spanish sweet paprika), plus more to taste (a nice addition to the spice shelf and one that’s unique)

Heat olive oil over low heat in large skillet. Add and cook until lightly browned, about 1 minute. Add onions  and cook, stirring occasionally, until soft and caramelized, about 20 minutes. If onion begins to brown too quickly, add 1 1/2 teaspoons water to pan to stop the burning process.

Add chorizo and cook until browned, about 2 minutes. Add potatoes and stir to coat; cook for 10 minutes. Add pimenton and enough water to cover; increase heat to medium-high and bring to a boil. Reduce heat to low and let simmer until potatoes are cooked through and water is reduced by half, about 30 minutes. Serve right away but if you can’t you can nuke dish back to life although you risk too-mushy potatoes.

Serve with anything other than a Pisco Sour.

This entry was posted in Uncategorized and tagged costumes, Peru, potato. Bookmark the permalink.

4 Responses to Cuzco in New York