Now You See It…

Magic captivates all ages, judging from the group at NYC’s Jewish Museum flooding in to see the exhibit: Houdini, Art and Magic. 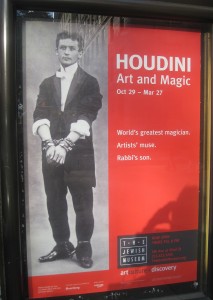 Erik Weisz, the name Houdini was born with, developed killer abs and a way with straitjackets and handcuffs. The grainy 1907 video of him leaping, securely bound, from a bridge to quickly emerge from the water smiling, is as breath-stopping as many scenes with body doubles in contemporary movies.

Because it was family day at the museum, roving magicians showed their stuff including a trick in which a ring borrowed from an on-looker turned up attached inside the magician’s zippered key wallet. A special magic show for kids explained the fine art of magical distraction and taught them a few simple tricks. 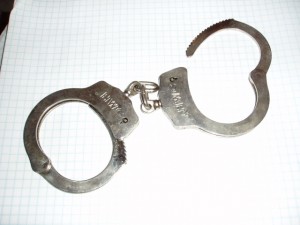 The exhibit, which runs until the end of March 2011, includes posters, film, video, contemporary art, an impressive  hologram and plenty of information about Houdini’s life, escape techniques and self-promotion skills. He often performed a new stunt right outside the main newspaper in town to be sure that photographers and reporters were at the ready. The Tony Curtis version of Houdini in the eponymous 1953 movie isn’t in a league with the real thing.

From magician to rabbit isn’t a big leap (sorry) so here is a recipe for Welsh Rabbit, a dish my father often made for Sunday night supper. (The name, sometimes written as “rarebit,” is said to be a dig at the always-poor Welsh who had to settle for cheese instead of meat for dinner.)

Melt butter over low heat, whisk in flour and keep whisking until smooth. Add the beer and continue whisking, about three minutes.
Stir in cheese and all other ingredients. Heat just until cheese melts. Pour over toast slices set into a bowl and serve immediately. (We used to eat our Welsh Rabbit poured over Holland Rusks which I haven’t seen in a long time. If you can find it, it works well. You could also substitute a toasted English muffin.) 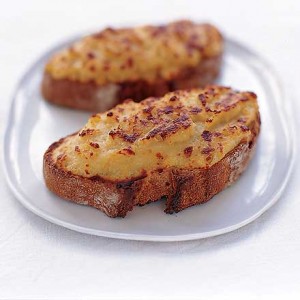 This entry was posted in Uncategorized and tagged magic, museum. Bookmark the permalink.

2 Responses to Now You See It…