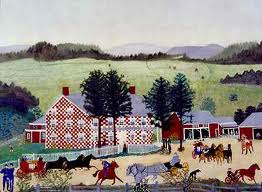 No, not either of mine, (neither of whom was known as Grandma—both disliked it), but Moses.

Anna Mary Robertson Moses was born in 1860 in upstate New York, grew up, married, had ten children (five of whom died in infancy) and began to paint in her seventies. Her work became immensely popular, so much so that she made it onto a commemorative stamp in 1969, had her picture on the covers of both LIFE and Time Magazines and has a work on view at the White House. The largest public collection of Moses’ primitive-style works is housed in The Bennington Museum. Bennington, VT. The museum also has a large collection of Bennington Pottery, permanent exhibitions including a hands-on schoolhouse and changing exhibitions –currently one called “Revealed: A Century of Women’s Underclothing” that made me very glad corsets are no longer in to say nothing of hoopskirts. 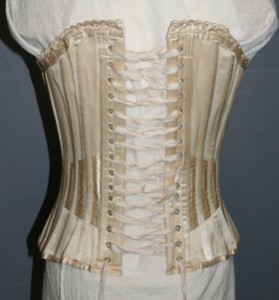 That's how you got a seventeen inch waist

Grandma Moses is credited with saying “If I hadn’t started painting, I’d have raised chickens” and “a primitive artist is one whose work sells.” Not bad, especially about the chickens.

Digressing to chickens, the trend to urban agriculture is inspiring more and more New Yorkers to raise them. Roosters are illegal because of their early morning wake-up call, (although the far more intrusive noise from garbage trucks is apparently perfectly all right), but hens are OK. Currently, Brooklyn is chicken central but the movement is on the rise. I don’t see a lot of co-op and condo boards giving a thumbs-up to hen coops but meanwhile, go urban cluckers! 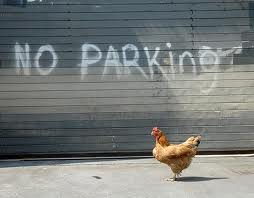 A chicken recipe seems in order. Try this:

BASQUE CHICKEN WITH PEAS
(originally from The New York Times)

Heat olive oil in skillet over medium heat. When oil is hot, brown chicken and season well with salt and pepper. Remove chicken from pan. Reduce heat, add peppers, onion, bacon, parsley and garlic to pan. Cook stirring constantly until garlic and onion become transparent, about ten minutes. Return chicken to pan, cover and cook over medium heat until chicken is nearly done and veggies are tender, about 30 minutes. Add peas, stir gently, cover and cook until they are cooked about 7 minutes. Check seasonings. If there is a lot of grease, get rid of as much as possible. Transfer contents of pan to a warmed serving platter and pour cooking juices over it.

(Note: I have no idea what makes this “Basque” but it’s delicious.)

This entry was posted in Uncategorized and tagged Bennington, chicken, corset, museum. Bookmark the permalink.