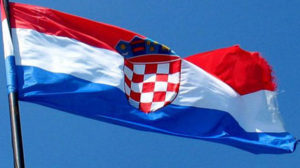 Awoke in Zagreb and stepped outside into the daily market right outside our door, bursting with fruit, flowers and all manner of Easter decorations, presided over by this statue of woman carrying bread on her head. 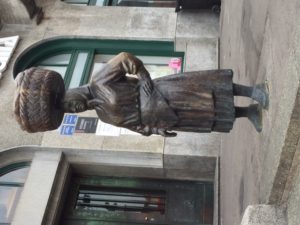 Like Italians, (not surprising since Croatia and Italy are next door neighbors), Croatians drink strong dark coffee in tiny cups. Zagreb has a real city feel with bustling shops, people on bikes and immense energy.  As is true all over Croatia, good design is appreciated and nurtured with small shops devoted to the work of local artisans. (As is also true, there is a wealth of kitsch especially small red hearts initially crafted of gingerbread, today many are plastic.)

Zagreb is divided into an upper and lower section accessible by funicular which was temporarily out of commission so we walked up. The upper town is straight out of a 19th century operetta with cobbled streets and St. Mark’s Church with blazing mosaic roof. 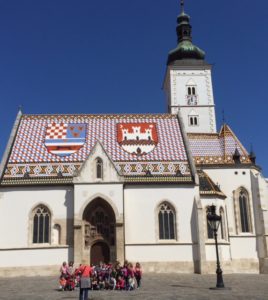 Upper is where you find the Museum of Broken Relationships, better in the idea than the reality as most of the stories told and depicted with one “telling” artifact are depressing whether they deal with romance or family.

One night we went to the opera in the Rococo cream puff of a theater where Verdi’s Don Carlos was playing. Surprisingly, there were supertitles but as the English was in tiny yellow type on black, I gave up trying to read and just enjoyed the music—all four and a half hours of it. The Hemmingway Bar,  across the street from the theater, pays tribute to Papa with a rhino head over the bar and French-ish art.

Zadar is a totally different experience. A Roman city with very modern touches, one of the highlights is the Sea Organ, an art installation at the water’s edge that uses a system of 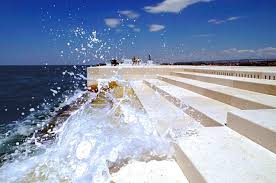 pipes to make music from waves and wind. Very cool. Also terrific: the Museum of Ancient Glass, housed in the 19th century Cosmacendi Palace with a very recent modern addition and a fantastic, multi-media exhibit of glassware from today and ancient Rome, especially containers ladies of that period used to store cosmetics. Estee Lauder couldn’t improve on them.

Throughout Croatia food is delicious and relatively cheap, even in good restaurants. Wine, very good, is almost free. 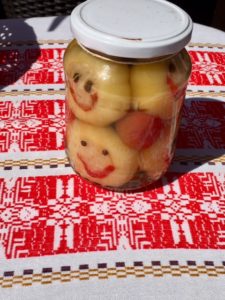 First photo is smiling pickled onions from the Zagreb food market, too cute to pass up. Second is Dalmatian prosciutto, known as prsut, very close to its Italian cousin. 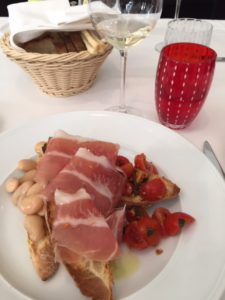 To duplicate, buy prosciutto and drape it over good bread with a side of drained white beans and red peppers that you either char yourself or buy. A drizzle of top quality olive oil and you have a great first course or light lunch. No idea how to say ‘cheers’ in Croatian but you get the idea.