Learning from The Bard 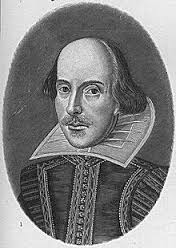 I’m taking a course at Hunter College called Shakespeare’s Heroines. Hunter is a wonderful resource, (and handy– only a few blocks away from where I live), although they don’t make it easy  to register as what’s known as a ‘senior auditor.’ My sense is they offer this ‘perk’ because, as part of the CUNY system, they have to. 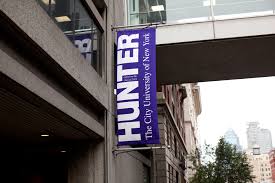 The professor, who shall go unnamed, is a treat, reminding me in the best possible way of some of my Vassar teachers. Not a kid, this woman also teaches at PACE and Montclair State University in NJ–something like six or seven different courses overall, which seems like an incredible load –yet somehow manages to keep it all straight.  Years of experience probably help. She’s well-informed, has a sense of humor and  structured the Hunter course so the students learn how to write a research paper using  resources like the New York Public Library for the Performing Arts and learn to understand Shakespeare as theater.

One of the course requirements is seeing one of the Bard’s plays live and in person and documenting attendance.  Early in the season I ran into a young classmate, (an actual, matriculated student), at a presentation of Measure for Measure at Bryant Park.  Never 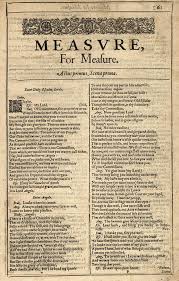 one of my favorite works, this offering was not enhanced by the addition of a “minstrel,” i.e., an overall-clad guy who played the banjo with accompanying bells on one ankle as well as a noisy party behind the stage that looked like a lot more fun than watching Isabella and Claudio. Each actor in the play had elected to speak in a different dialect, several vaguely Southern, and the whole was a mish-mash of styles. The good part: it was free and I saw it with friends.

Taking a course now is a big departure from back in the day. I mostly do the required reading (a play a week plus several critical works) but don’t deal with either papers or exams. In some ways, age does bring privileges.

This recipe has nothing–zero-zip– to do with Shakespeare but it does require (a little) measuring. It works well for serving to a group and can be frozen for later use. The original came from Sam Sifton in the NY Times a few weeks ago. I modified it for ease; it’s probably not as good as Sam’s version but quicker and would have been even more so had I put my blender together correctly and not had a sauce explosion that set me back a good half-hour. 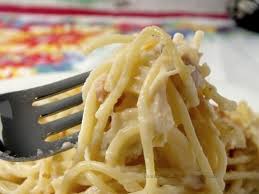 This is a link to the original recipe: http://cooking.nytimes.com/recipes/1018335-chicken-tetrazzini

3 or 4 cremini mushrooms (or not; I thought they’d make a nice addition)

1 tsp cayenne (original recipe calls for several kinds of chilies requiring seeding, cooking, peeling. To decrease the work AND degree of hotness as I was cooking for non-spice lovers, I simply used cayenne. Next time will bump up amount to 1 Tbls or use real chilies.)

Put porcini in small bowl, pour boiling water over them and let them soak. Strain, chop, set aside.

In a medium pot over medium heat combine chicken stock, milk, garlic, shallots. Simmer about ten minutes. Add cayenne, remove from heat and pour into a blender with 6 ounces of the grated Cheddar. Process to a smooth consistency. Reserve.

Heat oven to 400. Cook the spaghetti in boiling salted water in the large pot until just al dente. Drain and rinse under cold water.

Return spaghetti to the cooking pot and toss it with all mushrooms, chicken and lemon juice, then season with salt and pepper. Transfer to a casserole dish, approximately 9 inches by 13 inches (in my house called a ‘lasagna pan’) and pour the reserved cheese sauce over it. Cover with the remaining shredded cheese, place in oven and bake until the cheese has melted and started to turn golden brown, approximately 20 minutes. Garnish with chopped parsley, if you like, and serve.

Not hard, not all that much measuring and delicious. Serve with a good salad and voila, there’s dinner. Pour the wine but skip measuring. These days we need all the alcohol we can get.

This entry was posted in Uncategorized and tagged chicken, Hunter, Shakespeare, spaghetti, wine. Bookmark the permalink.

3 Responses to Learning from The Bard